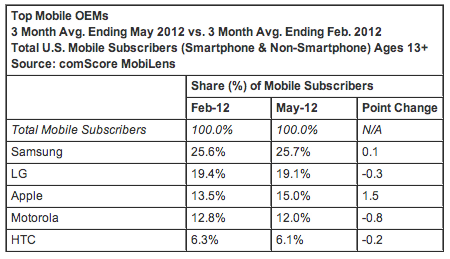 Research firm comScore is out with a new survey of the United States smartphone market and the numbers paint dire picture for everyone but Apple and Samsung. More importantly, data shows that the iPhone’s growth during the three month average period ending May 2012 outpaced Android, with Cupertino’s market share approaching 1 in every 3 smartphone subscribers…

Microsoft’s Windows Phone? Up only marginally, from 3.9 percent to four percent. Right now, Android and iOS are slaughtering Research in Motion and Nokia. RIM’s share fell two points to 11.4 percent and Nokia’s Symbian was down 1.1 percent from 1.5 percent. Nokia reportedly has plan B in place should its bet on Windows Phone prove a terrible mistake.

For the three-month average period ending in May, 234 million Americans age 13 and older used mobile devices. Device manufacturer Samsung ranked as the top OEM with 25.7 percent of U.S. mobile subscribers (up 0.1 percentage points), followed by LG with 19.1 percent share. Apple continued to grow its share in the OEM market, ranking third with 15.0 percent (up 1.5 percentage points), followed by Motorola with 12.0 percent and HTC with 6.1 percent. 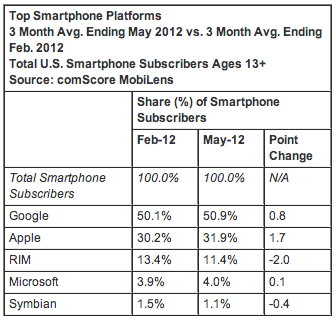 While Android outsold the iPhone by nearly a factor of two, another survey of web browsing habits by NetApplications showed that nearly two-thirds of mobile web share in June belonged to iOS devices, including the iPod touch and iPad. 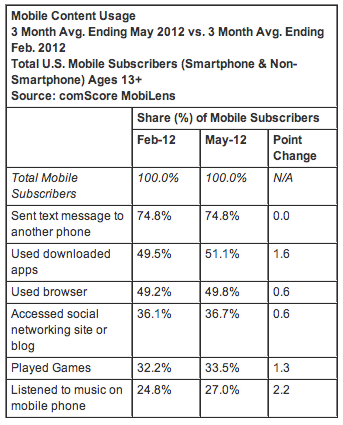 When looking at OEM vendors and overall handset sales that include feature phones, Apple grew the most whereas everyone else lost ground, with the exception of Samsung, which was the top handset vendor with 25.7 percent market share, a 0.1 percentage point increase.

Do these numbers come as a surprise?

Is Android’s growth slowing down, as data seems to suggest?