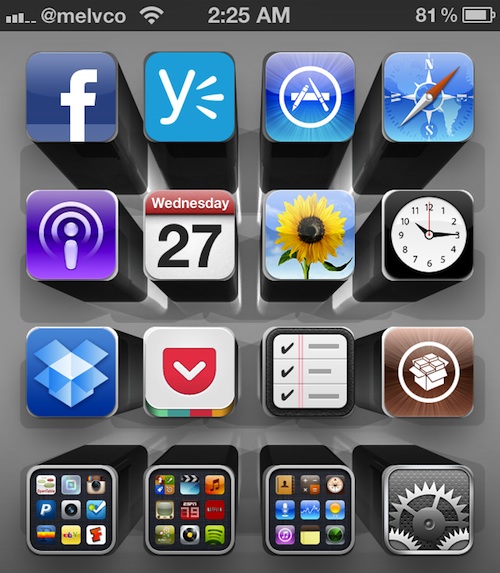 One of the main complaints I get about iOS is that it’s getting boring (these people are obviously not jailbreaking). And to be fair, the platform hasn’t really changed much since it was introduced back in 2007.

But maybe Apple’s finally looking to switch things up. We’ve already seen some cool new tweaks in iOS 6, like the auto-tilting sliders. And now the word is, we could be in for some even bigger UI changes…

Buzzfeed‘s Benjamin Jackson claims that he has heard Apple is playing with the idea of making UI elements in future versions of iOS, 3D.

“One Apple employee (who I can’t name as the company does not allow employees to speak on the record without approval from media relations) said that in the future, your phone will show drop shadows based on the actual position of the light in the room, as detected by the phone’s ambient sensor — and everything in the UI will be rendered in 3D on the fly.”

Initially, this might sound crazy. But if you think about it, it’s completely feasible. For one, we’ve already seen software-based 3D technology (it was based on head-tracking, but still similar). And two, Apple has already dipped its toe in the water with the aforementioned auto-tilting sliders.

The Cupertino company has long been rumored to be bringing 3D tech to its iOS devices. And we have to admit, this light-based solution (or camera/accelerometer-based) sounds much more Apple-like than dedicated 3D hardware.

Of course, this is all speculation at this point. There is literally zero evidence that the above-mentioned feature is coming to devices any time soon. Or at all for that matter.

But hey, it could happen. The question is, would you want it to?

[Link to the wallpaper, compliments of iDB reader Jorge] [TheNextWeb]