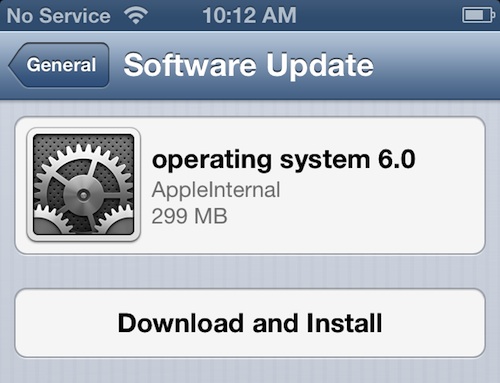 Apple has started pushing out iOS 6 beta 2 to developers this morning. It doesn’t appear to be available on the company’s dev site yet, but we are seeing it hit our devices via OTA.

We’re installing the update now and will let you know if we spot any changes in the new software. One minor difference we’ve noticed already, is that the gears in the icon (shown above) now spin during installation.

Update: added full change log and a video of the spinning gears animation

Update 2: iOS 6 beta 2 is now available for download in the dev center…

When an app is in a fresh privacy state and tries to present a ABNewPersonViewController, the user cannot dismiss that view controller properly even if they allow access to contacts. The user must force quit the app and relaunch.

Apple TV may restart while using the Remote app.

The NSNetService class and CFNetService APIs do not include P2P interfaces by default. To browse, register, or resolve services over P2P interfaces, an app needs to use the Bonjour DNSService*() APIs noted below.

To work around this problem, developers working on new projects as well as projects that require iTunesConnect metadata should work on actual devices instead of the simulator. Developers who have published apps already in the App Store and who wish to develop using the simulator can use the new iOS 6 features; however, they must be aware they are interacting with live production players, scores and achievements.

You should no longer add this dictionary to your app’s Info.plist file, as was required in beta 1.
SpringBoard