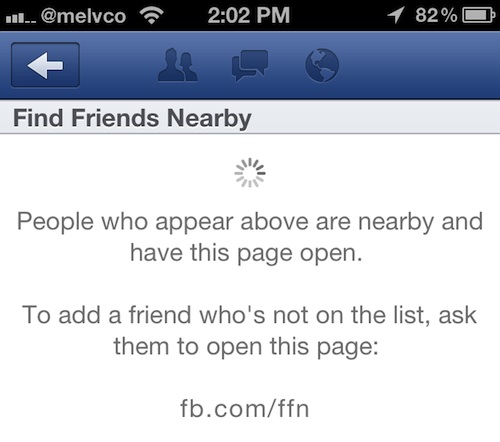 Facebook’s iOS team has been extremely busy over the past couple of months. They’ve created two standalone applications, App Center and then there’s that whole iOS 6 integration thing.

This weekend, the team launched a new feature for the social network’s mobile app called Find Friends Nearby. The addition allows you to automatically add nearby people, as friends…

“I built Find Friends Nearby with another engineer for a hackathon project. While it was originally called ‘Friendshake,’ we settled on ‘Find Friends Nearby’ for launch (the URL was a little bit of a homage to the previous iteration).

For me, the ideal use case for this product is the one where when you’re out with a group of people whom you’ve recently met and want to stay in contact with Facebook search might be effective, or sharing your vanity addresses or business cards, but this tool provides a really easy way to exchange contact information with multiple people with minimal friction.”

If you’re looking to try out Find Friends Nearby, you can find it in the iOS app by going to Menu > Find Friends > Other Tools. There’s no need to download or install an update.

Update: ABC News has pointed out that Facebook has pulled this feature, and has issued the following statement:

“This wasn’t a formal release — this was something that a few engineers were testing. With all tests, some get released as full products, others don’t. Nothing more to say on this for now — we’ll communicate to everyone when there is something to say.”