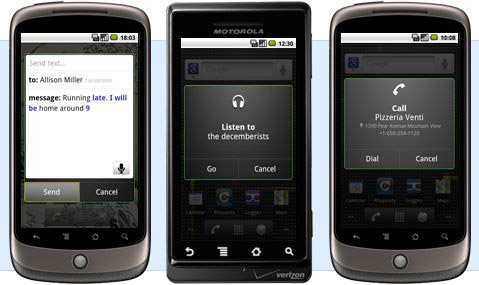 We’ve known for awhile that Google’s been working on improving Voice Actions in Android. Needless to say, last October’s release of the iPhone 4S and its headline voice assistant feature dubbed Siri sent Google’s engineers back to the drawing board in an attempt to re-envision what conversing with an Android device should be like. According to the well-informed Wall Street Journal, the search giant has now “accelerated” plans to bring Siri competitor to the market.

Jessica E. Vascellaro and Amir Efrati, writing for the Journal (emphasis mine):

As Google and Apple’s share has grown, the fighting between them has intensified. Last week, Apple unveiled the next version of its software for iPhones and iPads with a slate of features aimed at distancing itself from Google.

They include a mapping service and enhanced Siri “virtual assistant” that provides an alternative way to search for information besides the traditional Google search box.

Google, meanwhile, has accelerated plans to launch its own Siri competitor that would work on Android-powered devices, people familiar with the matter have said.

Google could unveil its Siri rival next week at Google I/O developers conference as the Journal reiterated that the search firm “is expected to unveil a lower-priced Android tablet that it developed with Asustek Computer” (here’s what we know about it so far).

This is how Voice Actions currently perform in Android.

It’s interesting that Google recognizes Siri as a major marketing advantage even if folks are torn over the usability and accuracy of Apple’s personal assistant.

Here’s a nice video of Robin, a third-party voice assistant for Android that looks to give Siri a run for its money in the navigation department.

As Jeff showed you in his Siri video demonstration, iOS 6 makes good on Tim Cook’s promisethat Apple has “a lot going on” on improving Siri. One of the more notable features in iOS 6 includes Siri’s ability to launch apps and integration with Apple Maps for spoken directions and asking questions along the route, such as nearby gas stations and more.

Siri in iOS 6 lets you check out scores from live games and the current season’s past games, schedules, team rosters, and player stats for baseball, basketball, football, hockey and soccer.

She can also help you pull upcoming showtimes, look up movie facts, play trailers and see ratings and reviews from Rotten Tomatoes.

Another enhancement: you can find restaurants by cuisine, price, location, outdoor seating, or a combination of choices, along with photos, Yelp stars, price range reviews and the ability to make a reservation via OpenTable.

Siri in iOS 6 also feels a lot snappier, though her voice appears to have changed to a slightly more robotic variant.

Do you think Google can catch up with Apple and beat Siri to the digital assistant punch?