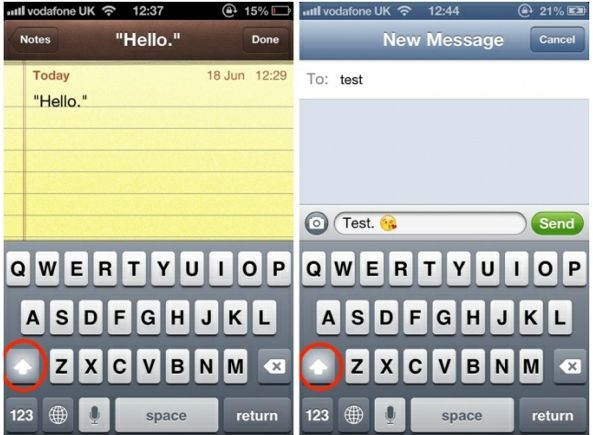 Here’s another small but useful tweak in iOS 6 which went under our radar: the virtual keyboard is now clever enough to capitalize after quotes and emoji.

Previously, when you started or ended a quote or ended your sentence with emoji followed by a period, the keyboard wouldn’t switch to capitals.

Killian Bell over at Cult of Mac spotted this minor, but surely welcome change:

When you start or end a quote in iOS 6, the keyboard automatically switches to capital letters after the first and last quotation marks – you no longer need to hit shift and do it manually.

Furthermore, if you add emoji after a sentence and you ended that sentence with a period, the keyboard will switch to capitals here, too.

Though some of you won’t bother, to me this is another welcome feature in the already strong arsenal of auto-correct keyboard features in iOS.

Usually when I’m typing my iMessages, text messages, email messages and whatever other form of quick communication you can think of, I pay attention to my punctuation and grammar as if I were writing a blog post.

iOS 6 also bring an array of new emojis. For the full run-down of all little and big new features in iOS 6, check out Cody’s quick overview of everything that’s new in iOS 6.