According to Peter Kafka of AllThingsD, and verified independently by my sources, podcasts in iOS 6 will have a dedicated app come this fall. Though the Podcast section is still present in desktop iTunes 10.6.3, released earlier this week, removing it from iOS 6 iTunes storefront indicates plans that a brand new Podcast app is in the works. Another tell-tale sign: at first run, the iTunes app tells you the iTunes U section has moved to a dedicated app, released back in January. Oh, Audiobooks too are MIA…

Kafka writes over at the Wall Street Journal-owned AllThingsD blog:

People familiar with Apple’s plans tell me that when its new iOS 6 software becomes widely available this fall, podcasts will have their own app, where users will be able to discover, download and play them on mobile devices.

Users who access iTunes via laptop and desktop machines will still find them in that version of iTunes, though.

AppAdvice was first to notice this change two days ago. As you can see in a comparison below of the iTunes Store storefront app in iOS 5 and iOS 6, the Podcast section indeed is now a goner. 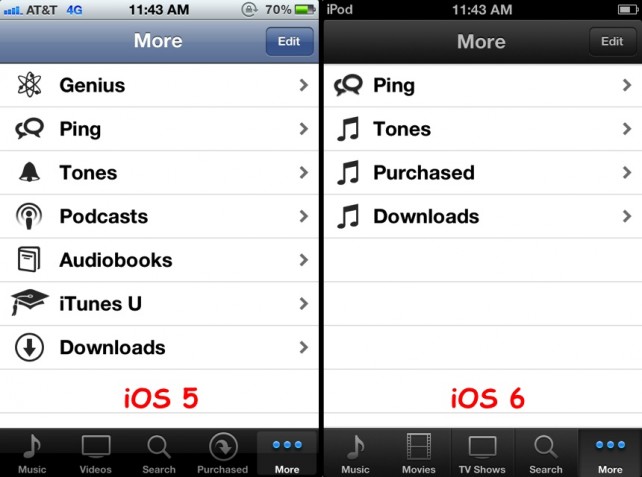 In addition to pulling the Podcast section (podcasts debuted on the iTunes Store with iTunes 4.9 release in mid-2005), plus Audiobooks and iTunes U from the mobile iTunes app, it’s worth pointing out that last year’s release of iOS 5 broke up the iPod app into separate Video and Music programs.

And with iBooks also being a separate app, it’s increasingly looking that the company will break up iTunes media categories into separate apps.

So the move to push podcasts completely into their own space may signal an effort to put iTunes on diet, something many Apple fans have asked for.

Whether or not the existing iTunes U app and rumored Audiobooks and Podcasts programs will ship with the iOS 6 operating system or be provided as optional downloads (as is the case with iBooks) remains to be seen.

We’ll find out in fall, when Apple promised to release iOS 6 to the public.

Would you rather prefer a ‘one app fits all’ approach to handling iTunes media in iOS 6?