An interesting change in tablet web traffic in June, as observed by ad network Chitika which sampled hundreds of millions of ad impressions across mobile apps that incorporate its solution. While they’re by no means an accurate representative of the market, the numbers still outline market trend changes.

As noted by TechCrunch, the iPad dipped from 94.64 percent of all tablet web traffic in May to 91.07 percent in June. The Nook managed to score 0.85 percent of all tablet traffic, zooming past the Kindle Fire which recorded a 0.71 percent share, which was enough to only edge out RIM’s BlackBerry PlayBook, HP’s TouchPad and Sony’s Tablet 5.

The Galaxy Tab leads the non-iPad pack with a 1.77 percent share of traffic, followed by the Acer Iconica, Toshiba Thrive and the Asus Transformer. 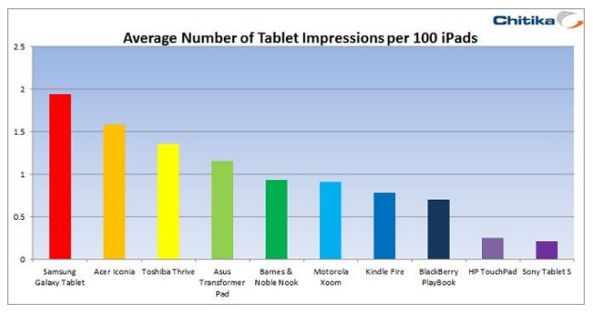 So, why did the Nook gain share in June?

Analysts at Chitika speculate that B&N’s new advertising campaign and launch of the new Nook Simple Touch reader (the one with the glowlight) could have had an indirect impact on Nook sales, and that even though the Simple Touch doesn’t support web browsing itself, Nook has benefitted in an increase in brand familiarity via its Simple Touch ads.

It’s cool that other tablet vendors are fighting among themselves on price points and features, but the tablet market still belongs to Apple.

Google is slated to share some updates with us regarding the next Android version code-named Jelly Bean later this month so perhaps Samsungs and Motorolas of this world are holding out for that.

It’s also worth pointing out that this survey only includes the time frame between June 4-10 so the numbers should, and likely will, change by the end of June.

So I guess my question would be: if Samsung’s Galaxy S III is enticing enough for some iPhone folks to upgrade, which tablet would you prefer over the Retina-enabled iPad?