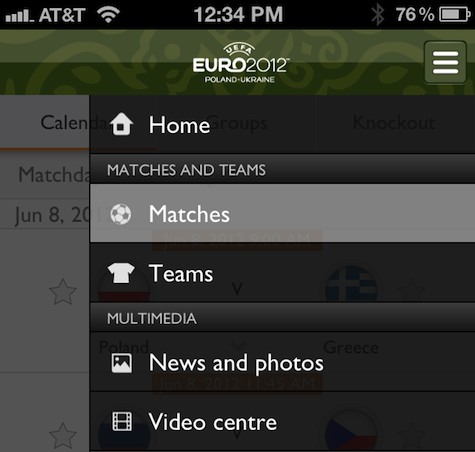 As noted by MacRumors, UEFA (Union of European Football Associations) has just released its official app for Euro 2012. The 14th annual European Football Championship starts Friday, June 8th, and will continue on for the rest of the month.

But if you don’t plan on being around a TV set for the next month, the Official UEFA EURO 2012 app is your best bet for keeping up with the action. With it, you’ll be able to:

That last bullet point is likely referring to the app’s $9.99 in-app purchase, which is currently inactive, but should become available once the tournament starts. For $10, though, we’re hoping it includes more than just highlights.

At any rate, if you’re interested in checking out UEFA EURO 2012, it’s available in the App Store for free.

Will you be watching Euro 2012? What do you think of the app?