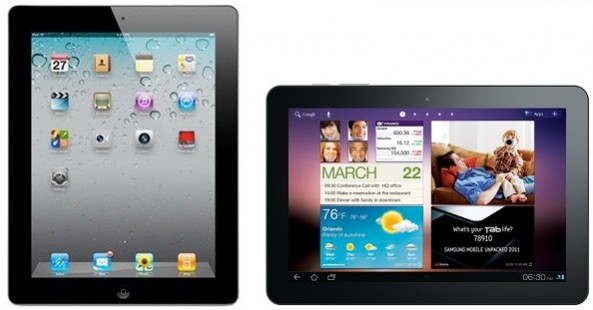 A judge in California this morning decided to hold off on a ruling related to Apple’s case against Samsung, meaning Cupertino won’t be able to impose a sales ban on Galaxy Tab tablet sales in the United States. Apple’s also been dealt another blow in Germany as a court said it’s unlikely to grant them the same victory against Motorola’s tablet as it’d done with last year’s sales ban of the Galaxy 10.1 tablet…

Apple Inc. was denied its renewed request for a ban on U.S. sales of Samsung Electronics Co.’s Galaxy Tab 10.1 tablet computer while the case is still before a federal court of appeals.

U.S. District Judge Lucy Koh in San Jose, California, said yesterday that she doesn’t have jurisdiction to issue a preliminary injunction because the U.S. Court of Appeals for the Federal Circuit in Washington hasn’t issued a mandate yet. The judge said Apple can renew its request once the court in Washington issues its ruling.

And in another story, Bloomberg explains the Motorola ban situation in Germany:

The German court that banned Samsung Electronics Co.’s Galaxy 10.1 tablet sales last year is unlikely to grant Apple the same victory against Motorola Mobility’s device, Presiding Judge Johanna Brueckner-Hofmann said at a Dusseldorf hearing. The assessment is preliminary and may change after today’s arguments are reviewed. A ruling is scheduled for July 17.

Not sure about you, but I’m so over this legal crap.

Cook was so right, patent wars are indeed “a pain in the ass”.

I just wish they settled so we could stop reporting on this nonsense and focus on the stuff that matters.