Tim Cook shared a pretty interesting data point at yesterday’s D10: All Things Digital conference. He said Apple sold 2.8 million units of the $99 set-top box in 2012 so far, nearly matching sales for the whole of 2011.

Cook argued that 1080p hardware upgrade and greater content availability on iTunes helped drive sales. Microsoft was keen on pointing out that Apple TV numbers pale in comparison to its Xbox 360 console…

Cook also relegated dedicated console gaming to a niche market and repeated his predecessor’s stance on Apple TV being a hobby business when asked to provide an update of Apple’s television efforts.

It’s very uncharacteristic of us: We’ve stayed in the Apple TV product business, and we’re not a hobby kind of company, as you know.

It would seem the following comment provoked a reaction from Microsoft:

Last year, we sold 2.8 million Apple TV’s. This year, in the first 6 months, we’ve sold 2.7 million. We’ve almost equalled last year. That was helped by 1080p and movies in the cloud. It’s a key part of the ecosystem.

This is an area of intense interest for us. Many of us, the TV that we do watch, is almost exclusively on it. That’s what my TV watching is. All of my movies, everything is coming through Apple TV.

To this, Frank X. Shaw, lead corporate communications for the Redmond giant, responded on Twitter:

I think it’s pretty telling Microsoft even bothered to address Apple ‘s numbers. By doing so, they just acknowledged Apple’s $99 hockey puck as a viable player in the living room space.

Or perhaps it was Cook’s assessment on Apple’s growing credibility in the fast-growing casual gaming market that has been ticking the Windows maker off?

We’re in gaming now. One of the prime reasons buy an iPod touch is gaming. I realize that’s not the big screen that you’re talking about, but gaming has evolved a bit. You have more people playing games on portable devices than on the big screen TV now, so where we might go in the future, you know, we’ll see.

But this is an area where customers love games, we want to do things that customers want us to do. I’m not interested in being in the console business, “traditional” gaming.

But if you view gaming more broadly than that, then I feel we are a pretty big player today and the things we do in the future will only make that bigger.

Cook was taking a stance that gaming nowadays is undergoing a major shift from dedicated consoles that appeal to hard-core gamers to the on the go entertainment on smartphones that targets the growing casual gaming market. 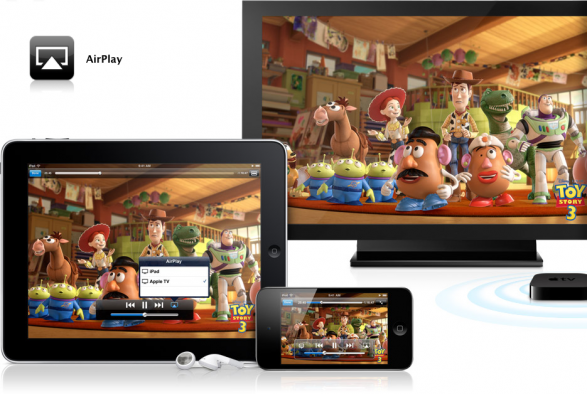 Apple’s secret weapon in this regard is AirPlay, a media streaming technology which works in tandem with a $99 Apple TV box to stream games and other content from iOS devices (and soon from Macs with OS X Mountain Lion installed) to your television set.

Given impressive graphics capabilities of iOS devices and thousands of inexpensive (yet high-quality) games available on the App Store, such a combo effectively bypasses a dedicated gaming system, creating a valuable proposition for casual gamers.

Be that as it may, there’s no doubt that Microsoft will watching Apple’s television strides closely.

Earlier today, we reported on a rumor that Apple is readying a much more feature-complete version of the Apple TV software.

Said to launch in two weeks time at WWDC, the software will reportedly drive a full-blown television set from Apple, which by some accounts is already in early preparations for mass manufacturing.

Nowadays, one has more Hollywood movies and television shows available for streaming to their living room through the Xbox 360 console compared to what’s available on iTunes.

Analysts have long been warning that Apple needs to double down on content availability.

Being content with getting my digital entertainment via iTunes, I’ve only streamed a couple television show episodes through my Apple TV and bought only five movies so far.

As much as I wanted to, I simply find iTunes content seriously lacking in this regard.