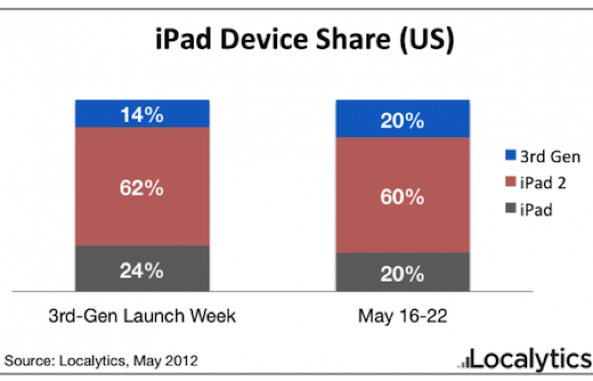 According to a new research note out today, compared to its launch-week usage share, the new iPad is now being more widely used in the United States than the original iPad, launched in April 2010.

That’s good news for Apple’s post-PC strategy, one that will hopefully put to rest concerns that the Retina display, faster GPU and better cameras won’t entice would-be buyers enough to take the plunge.

Quite the contrary, the iPad 3 is picking up considerable steam even if much of its growth in the United States comes from owners of the original iPad and iPad 2 upgrading to the third-generation model…

According to a blog post over at Localytics, two months in and the new iPad has overtaken the original model in usage share.

Specifically, the third-generation iPad now claims a cool one-fifth of the market for all iPads in the United States, or 20 percent. That’s a 50 percent increase over the 14 percent share the analytics firm recorded in the first four days of iPad 3 availability.

Bear in mind that there were only four million units of the new iPad on the market during the launch week – and that includes nine other markets, not just the United States.

The iPad 2 remains in the lead with three times higher usage share versus the new iPad.

While its swift overtaking of the original iPad is impressive, it has a long way to go to leapfrog the iPad 2, which is still available in 16GB capacity for $100 less than the third-generation iPad’s basic model.

It’s worth pointing out that Localiytics derives these numbers from third-party apps using its analytics solutions.

Therefore, their survey may not be an accurate representative of the overall market, but it certainly highlights key trends.

To me, there’s only one conclusion: literally all of the iPad 3 growth in the United States has come from iPad 1 and 2 owners upgrading their devices.

If true, that has got to be a worrying sign.

Maybe I’m reading too much into these numbers?