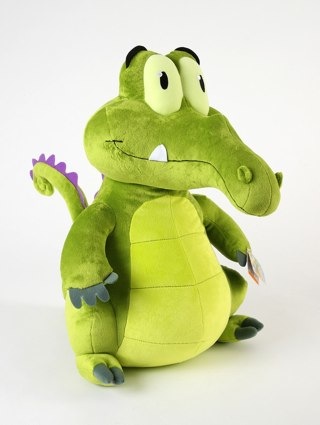 Not to be outdone by Angry Birds maker Rovio, Disney today announced a new merchandise line for its iPhone puzzler dubbed Where’s My Water.

The charming little alligator who lives in the sewers under the city is Disney’s first original character for mobile and can now be bought as a plush toy.

Disney also promised a number of other items, including consumer electronics accessories, apparel and accessories…

According to a press release, both Cranky and Allie, the female alligator who humors Swampy’s attempts to bring human culture to alligators, can be bought as plush toys from the likes of Hasbro, JAKKS Pacific/CDI and Toys R Us beginning next month.

For the uninitiated, Where’s My Water tasks you with guiding water to Cranky’s bathroom in the sewers under the city.

A staff favorite here at iDB, Where’s My Water launched last September and immediately captured attention of iPhone gamers on the lookout for great puzzle game.

It has reached the No. 1 spot on the App Store in 80 different countries and recently launched on Android platforms for Google Play and the Amazon Appstore.

Disney said Swampy will make his online debut “later this year” in a dozen episode web series called Where’s My Water?, the Adventures of Swampy.

Chunli Fu’s download of Where’s My Water earned him a cool $10,000 iTunes Gift Card from Apple as he won the App Store Countdown to 25 Billion Apps in March.

Priced at just 99 cents, it’s a no-brainer. Plus, it taps iCloud to keep your progress synchronized across iOS devices and looks stunning on your iPad, even if it lacks Retina graphics.

Personally, I think Apple should have included Where’s My Water in their annual list of top iPhone and iPad apps.

It’s one of the few games I keep on my iPhone to kill a few minutes in between paying my bills and shopping for groceries.

Did you play it?