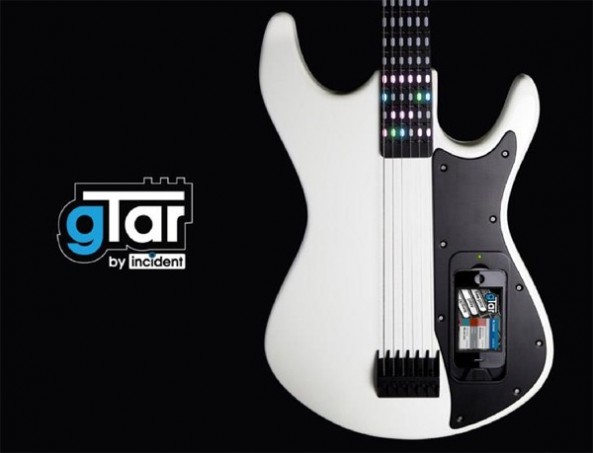 Wondering where music technology is headed? Look no further than the gTar, by Incident. The iPhone-powered electric guitar not only puts hundreds of songs and digital effects at your finger tips, but it’ll also teach you how to play.

Simply drop your iPhone into the gTar’s 30-pin dock, load up the accompanying app, and an array of interactive LEDs along the fretboard will guide you through your favorite songs. Playing a real instrument has never looked so easy…

How does it work? Well instead of using pickups to amplify the sound of vibrating strings — the way most guitars work — the gTar users sensors to detect what notes the user is playing in real-time. And it relays this data back to the iPhone.

One of the instrument’s most exciting elements is an intuitive feature called SmartPlay. This allows users to play music like a pro, regardless of how experienced they are, as it mutes out incorrectly played notes and helps them through difficult songs.

The free gTar app will include a number of tracks — all of which will be learnable through three levels of difficulty, and a library full of digital sound effects. And Incident says that it plans to add new content to the app on a weekly basis.

What do you think of the gTar?