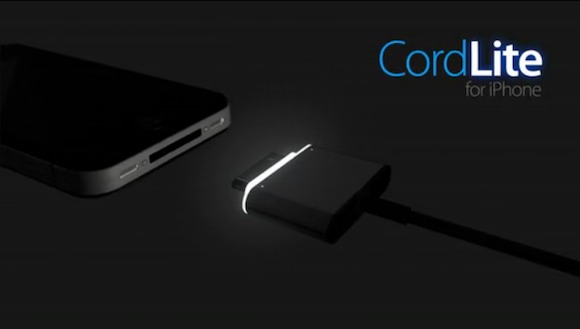 Every night, as I’m going to bed, I dock my iPhone on a Sony-branded alarm clock and attempt to plug in my iPad to its USB power adapter. I say attempt because in the dark, that’s not exactly an easy task.

Well, TechCrunch points to a new Kickstarter project that is looking to change that. CordLite, the product of Scrap Pile Labs, is an iOS device charging cable that provides illumination in low-light settings…

Looking at the CordLite, you might think it’s just your everyday third-party 30-pin cable. But as soon as you pick it up, you’ll notice the difference. The dock connector has two front-facing LEDs, which are activated by touching any part of its surface.

The project already has around 600 backers, who have pledged nearly $25,000. But it needs to reach $70,000 in the next 37 days to get funded, so the company can start mass-producing the light-up cables for global distribution.

If you’re interested, pledging $25 will get you on the list of folks to receive a CordLite when they start shipping in September. That’s a pretty good deal considering these things will likely hit retail stores by year’s end for closer to $40.

What do you think of the CordLite? Good idea, bad idea?