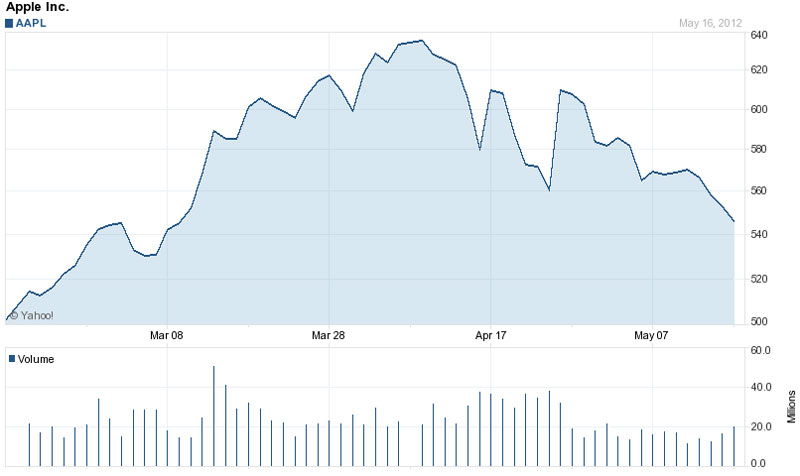 Have you noticed the ‘broken record syndrome’ over at Business Insider? The publication’s been running an article series under their trademark sensationalist headlines that spell doom for Apple’s stock price.

So, what’s going on here? Is AAPL on a downward spiral? And what’s up with the $2,000 per share Apple meme?

A silly Apple rumor can easily swing shares of both Apple and its competitors. We’ve seen it lately as a sketchy report from Asia caused a $10 billion dip in Samsung’s market capitalization.

But this latest example just boggles my mind.

As The Wall Street Journal reported, the mysterious decline of Apple’s shares that Business Insider was riding on this week can be blamed on one man, DoubleLine Capital’s Jeffrey Gundlach and the comments he made in a room packed with investment managers.

Before announcing he was shorting Apple, the analyst said he didn’t believe Apple’s growth was sustainable:

I just wonder how many people will queue up around the block for an iPad 87.

So I’m not an analyst and because I don’t hold most of them in particularly high regard I’ll refrain from opining just this time.

The stock took a nosedive immediately following the comment.

If I were one of these crazy hedge fund guys, with the slick haircuts and fancy shoes and racing stripe shirts, the trade I’d put on is 10-times-leveraged natural gas long versus 10-times short Apple.

We know Steve Jobs hated hedge funds. He didn’t shy away from calling them out for manipulating Apple’s share price, even though hedge funds own only five percent of Apple’s 935 million shares.

Greenlight Capital’s David Einhorn saved the day by pointing out that Apple’s fortunes are not dependant on one particular product or even hardware sales per se.

He then went on to lay out the Apple pull:

Customers who buy one Apple product tend to want more, and once that happens Apple has captured the customer. At that point, a future customer has to make a product that isn’t just a little better but a lot better to get the customer to switch. The high switching costs make Apple worthy of a higher multiple.

I’m totally with Einhorn. Apple is and has always been a software company (and a marketing agency of sorts, if you will) that just happens to sell hardware products.

But what about real analysts? You know, the independent types who actually happen to be right more often than wrong?

Fortune’s Philip Elmer-DeWitt recently profiled Zaky, who runs a subscription-only blog Bullish Cross, noting “his estimates over the past four years have been considerably more accurate than your average Wall Street analyst”.

DeWitt often ridicules analysts and numbers are his life so one would be wise to take his analysis of Zaky’s performance seriously.

Zaky estimated that Apple will continue to grow sales and expand product lines, which will boost its earnings and cause the stock to hit the $2,000 a share milestone by the end of 2015, even if it continues to trade at its currently low valuation of 14 times earnings.

2014 is the golden age of Apple and the peak growth year. After 2015, growth will stall and Apple will become a mature company — at least for this era.

Here’s Zaky’s Trailing Twelve Months (TTM) estimate for Apple. TTM is a financial metric that gives you a sense of a company’s financial performance over the past twelve months. 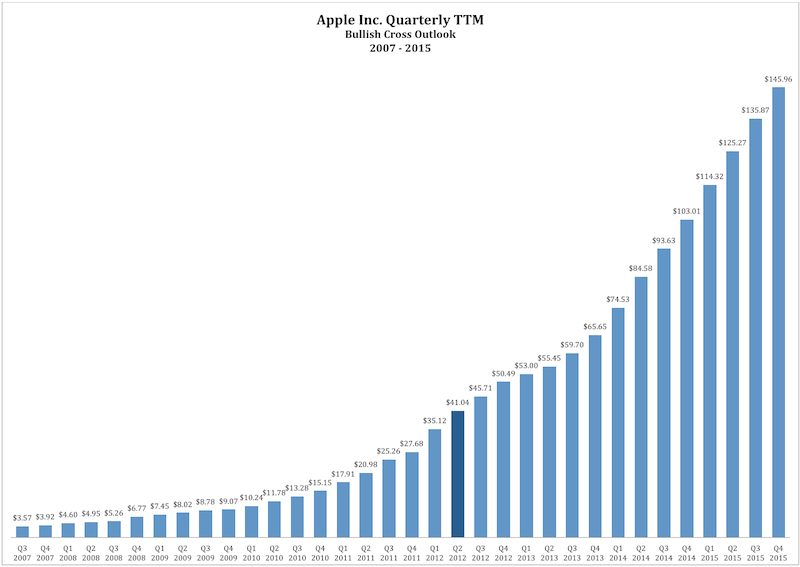 As you can see, Apple’s TTM is set to grow more than three times by 2015 on the strength of Zaky’s iPhone sales projection alone.

So, should you buy AAPL now?

While iDB cannot provide financial advice and won’t be held responsible for your investment strategies, we’re noting here purely for the sake of discussion that Zaky’s Bullish Cross just initiated a buy rating for Apple.

They’re very conservative with these, mind you: it’s their fifth buy rating for Apple ever and first in eleven months.

According to Zacky, courtesy of AppleInsider:

So today, Apple is not only very attractively valued as it trades at a near 8-year low P/E ratio, the stock is also incredibly oversold. Moreover, the stock has now retraced 38.2% of its gains it recorded in the rally between $363.21 in November and $644.00 in April.

At $500 a share, Apple would trade at a 12.18 P/E ratio and the stock would have retraced 50% of its gains. That’s why the area between $500 and $530 presents with a very unique buying opportunity while the area between $530 and $550 presents with a relatively rare buying opportunity that we see a handful of times in a year. You can see our past buy ratings here and the ensuing results.

You should know that Bullish Cross only updates buy rating when Apple has been extremely oversold and when the stock’s valuation has become very depressed.

You’re more than welcome to share an opinion and vent your frustrations down in the comments.