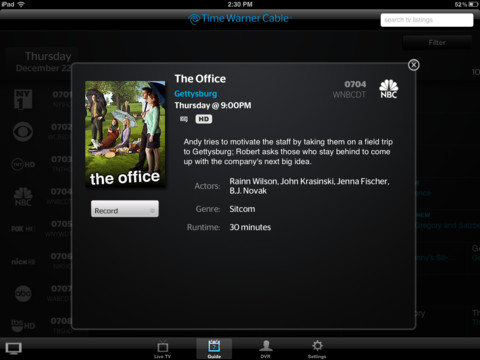 Media giant Viacom and cable telecommunications company Time Warner Cable have finally resolved a legal dispute concerning streaming of Viacom content through Time Warner Cable’s iPad app. As a result, Time Warner Cable subscribers will soon be able to enjoy their daily fixture of Viacom shows such as The Daily Show With Jon Stewart and Jersey Shore on their iPads.

Remember, a year ago Viacom filed a suit in Federal District Court in Manhattan to prevent Time Warner Cable from streaming its content through their iPad app, claiming the cable company did not have legal rights to stream shows via its own app.

Viacom’s  similar lawsuit against the Cablevision Systems Corporation and its iPad app is still pending, though…

A statement released yesterday on the Viacom blog confirmed the two companies had agreed “to resolve their pending litigations” and that “all of Viacom’s programming will now be available to Time Warner Cable subscribers for in-home viewing via Internet protocol-enabled devices such as iPads”.

The post also confirmed that Viacom programming will be rolled out on the TWC TV app “over the next several weeks”.

Cable and satellite distributors have raced to come up with their own apps that offer subscribers shows inside and outside the home on multiple devices. But those efforts lead to complicated disputes with media companies, which argue they deserve additional compensation.

The companies also say that making content too widely available will cut into licensing profits to third-party streaming services. Many Viacom shows are available on the channels’ individual Web sites and through Web streaming services like Netflix and Hulu.

It’s interesting that Time Warner Cable was restricting owners of jailbroken iPads to use their application, putting up an error message saying “TWCable TV is not supported on jailbroken devices”.

Needles to say, the move agitated the jailbreak community. 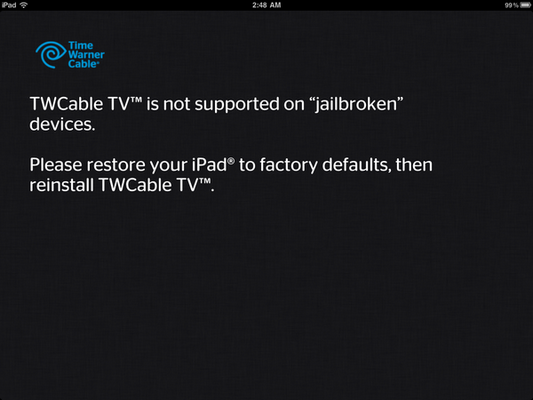 It’s a bit surprising that a video streaming program would have anti-jailbreak measures, but a workaround solution was quickly created allowing owners of jailbroken iPads to bypass restrictions.

Are you using the TWCable TV app to watch cable TV on your iPad?