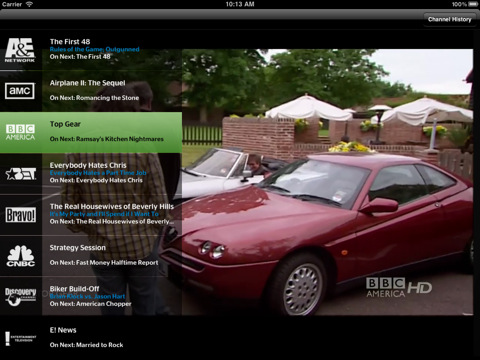 The app has already been out for a few weeks, but Time Warner’s iPad software is still making headlines. Although at first it offered most of the content available to their TV customers, they have recently been forced to pull several channels due to complaints.

Broadcasters Viacom and News Corp. have led the charge against Time Warner’s new streaming application, Viacom even has a pending lawsuit with TWC, seeking damages.

“Viacom has made clear that it is willing to discuss extension of similar rights to others – including TWC. What Viacom cannot do, however, is permit one of its contracting partners, TWC, to unilaterally change the terms of its contractual relationship.”

Viacom intends to block Time Warner Cable from distributing its content on new devices, from tablets to Smart TV apps, until additional payments have been negotiated. Time Warner Cable recently posted on their blog regarding their disagreement.

They claim that the networks are simply imposing new “artificial limits” on the screens its subscribers use. Apple Insider quotes the TWC blog as saying:

“Instead of rowing down the river of history and into the future, Viacom, FOX, and Discovery have chose to sit on the bank and kick rocks.”

But TWC seems to have brushed off the quarrel. Shortly after removing programming, they added new channels including ABC, Disney, and A&E.

Time Warner Cable’s free app has seen over 300,000 downloads since it was introduced in late March. It allows TWC subscribers to watch TV inside their homes and requires Wi-Fi.

It seems like the iPad would just be considered another TV in a household. If the app only works in subscriber’s households, why are networks like Discovery and Fox so upset about it?