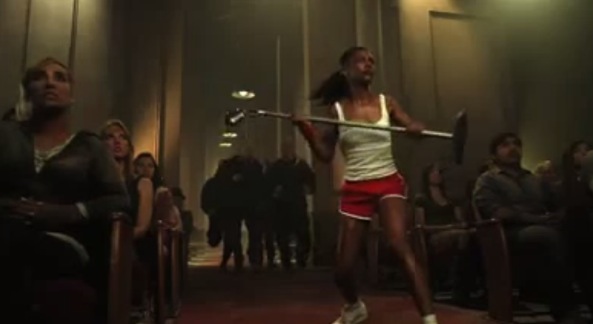 Alluding to George Orwell’s 1984 novel, ABC’s cheesy commercial blatantly copies Apple’s down to a lookalike of an unnamed heroine in white tank top that represented the coming of the Macintosh.

Instead of throwing a large brass-headed hammer to smash a televised Big Brother, in ABC’s version an Olympic track and field athlete hurls a stage microphone at the big screen. Upon impact, the curtain falls down to reveal the familiar-looking set as the audience rises to a standing ovation…

The show will air next Thursday, May 24. Judging by the advertisement, it probably won’t differ much from the likes of American Idol, X Factor and similarly dumb-named singing contests.

Producers hired talents of Kelly Clarkson, Jennifer Nettles, Lionel Richie and Robin Thicke who will travel across America to find their duet partners.

Television personality Quddus, best known from his days as the host of MTV’s Total Request Live, will host the series.

As you know, 1984 aired only during the third quarter of Super Bowl XVIII on January 22, 1984 and just one other time on television.

Well, ironically enough the estate of George Orwell and the television rightsholder to the novel 1984 deemed it a flagrant copyright infringement. They were apparently enraged enough to send a cease-and-desist letter to Apple and its marketing agency Chiat/Day.

As a result of legal pressure, the advert was never televised as a commercial after that, though it’s since been featured countless times on television commercial compilation specials.

27 years later, Motorola spoofed Apple with its own version of the 1984 advert. That one, too, premiered during Super Bowl.

What did you think of the Duets advertisement?

Would you call it a homage or a rip off?