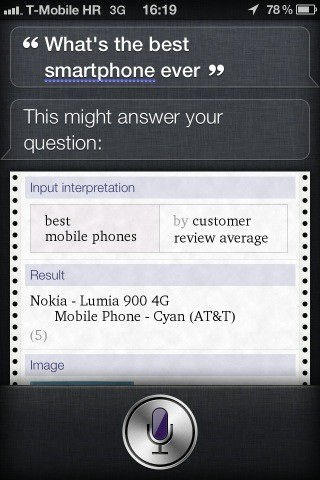 You’ve probably seen reports on how Siri was telling the world that Nokia’s Lumia 900 was the best smartphone ever.

She was simply relaying a response provided by the Wolfram Alpha computational knowledge engine which averaged customer reviews across the web.

But Apple has taught Siri better so she now replies with “You’re kidding, right?” or “The one you’re holding in your hand” or somesuch response.

Needles to say, Nokia wasn’t too happy and was quick to accuse Apple of recalibrating Siri, tarnishing her credibility in the process. As if Nokia didn’t have other worries on its mind, mind you…

Apple position Siri as the intelligent system that’s there to help, but clearly if they don’t like the answer, they override the software.

This below is one of the answers Siri’s now providing to the ‘best smartphone ever’ query. 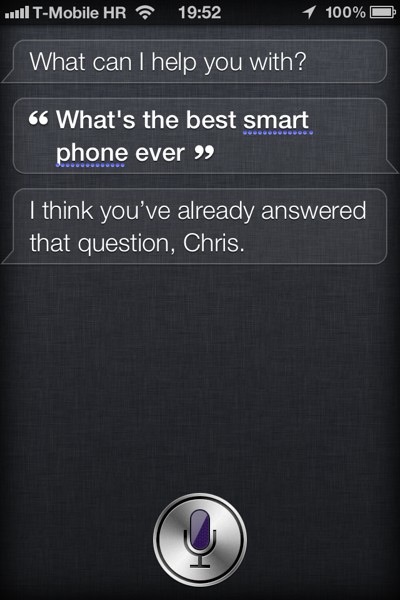 Of course, Wolfram will use its own mechanism for sorting. The bottom line is that Wolfram has ratings from Best Buy, and it’s not trying to weight those in any particular fashion such as number of reviews or number of purchases.

The Lumia rates tops on Wolfram because four people gave it 5 stars, versus 86 people who give the AT&T 16GB version of the iPhone 4S an overall rating of 4.7.

Let’s disregard for a moment the fact that Wolfram Alpha is very limited when it comes to reviews (it only taps Best By for the ‘best smartphone’ list and puts HP’s TouchPad tablet in third place).

In my opinion, Nokia was right to bring this matter to users’ attention.

For starters, where did this new answer come from? Was it Wolfram Alpha? Best Buy sales charts? Some other source? Was it a one-off tweak?

The truth is, we’re left in the dark though these things should be transparent.

If the iPhone maker reserves the rights to tamper with Siri and edit her responses to favor their own products, we the people are then entitled to question her usability and Apple’s business practices.

It would be easy to call out Nokia for picking a fight with Apple over such a seemingly unimportant response generated by a software product which hasn’t even dropped the beta flag yet.

Cynics could point out that Nokia has other worries on its mind.

The Espoo, Finland-headquartered cell phone giant is in the middle of a major transition to Microsoft’s Windows Phone platform, a risky move threatening to push the company into bankruptcy before it even grabs a chance to get back on track.

The company’s latest move: a pair of cheap phones that it hopes will help regain lost ground in emerging markets.

I wouldn’t put my money on inexpensive Nokia phones.

And trimming the costs should be Nokia’s business mantra. Make no mistake, Nokia will fall apart should they continue bleeding money at this rate.

And this is Nokia’s position on the stock market today. 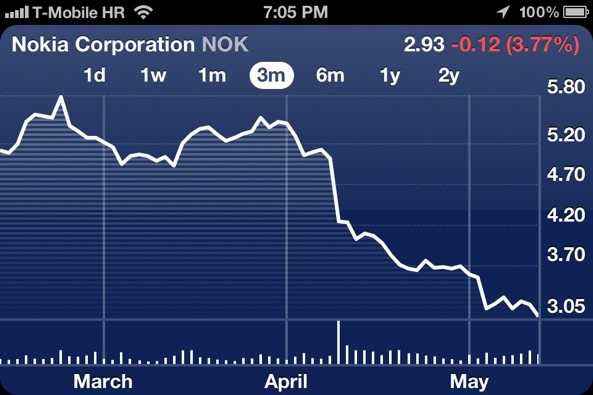 Short-sighted investor have by now dumped their Nokia shares.

Those in it for the long run argue that CEO Stephen Elop, a former Microsoft executive, needs time to put his Windows Phone strategy to work. From where they’re coming, a sharp decline in sales (Samsung overtook Nokia as the #1 cell phone vendor for the first time) was expected as Nokia is transitioning itself to a new software platform.

Nokia used to be huge in Europe where I’m located and still is a major player.

My biggest concern with Nokia is a very realistic prospect of them going bankrupt.

We’re all for competition here, I presume.

Nokia going down the drain would only help the Android-iOS duopoly grow and take over the entire market for cell phones, eventually stifling innovation.

Remember, Apple used to innovate the iPod like crazy until it established a choke-hold on the MP3 player market.

Case in point: when was the last time a new iPod set the tongues wagging?

By the way, try asking Siri what the best tablet ever is.