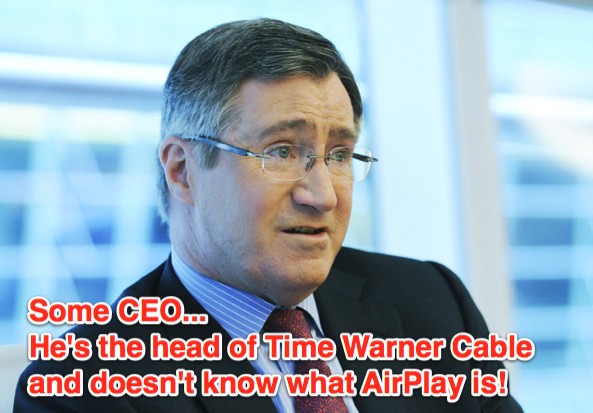 This one made rounds on the web today. Apparently, head of Time Warner Cable is totally oblivious to the existence of AirPlay, a technology from Apple that beams photos, music and videos from iOS devices to your television through an Apple TV set-top box.

Glenn A. Britt, Time Warner Cable’s chief executive, opined in a Friday interview there was no simple way to get Internet-based video onto the television screen.

I’m not sure I know what AirPlay is. Today we want to be on every screen. Today it’s a little bit clunky to get programming from the Internet onto the TV — not so hard to get it on your iPad. What’s hard is the plumbing, what wires do you connect, what device do you use. So the current Apple TV, the little thing, the hockey puck, really doesn’t do anything to help enable you to get Internet material on your TV.

As any tech-savvy user knows, a number of boxes exist that deliver web clips onto the TV screens, including the Apple TV or Google TV-powered set-top boxes, as well as Smart TV sets by Samsung, Panasonic and other HD TV set makers, to name a few.

Oh wait, Britt does know about Smart TVs, it’s just he doesn’t like set-top boxes much.

“I hate set-top boxes”, he said and added that Smart TVs are better for viewing web content compared to an extra box sitting under one’s telly.

Well, he’s right about that.

I’ve been arguing all along that Apple should make a television set of its own with the Apple TV functionality built-in because it’s really hard to make a compelling argument about set-top boxes to tech-illiterate buyers.

I want a $2,000 badass television set from Apple as I’m with Britt on set-top boxes and hate a $99 hockey puck that is the Apple TV.

Britt’s comment made me wonder if he knew his company supplies a streaming app to his iOS-totting subscribers.

Matter of face, that piece of software didn’t go without its share of controversy.

Luckily, jailbreakers were quick to remove its anti-jailbreak measures.

AirPlay, a software tool included with Apple’s iPads and iPhones, is widely viewed as being potentially disruptive to the cable industry, because it makes it easy for people to view a broad variety of Internet content on a television.

AirPlay also makes it easy to push pirated video available on the Web onto the television, which could lead some people to drop their cable subscriptions

The Loop summed it up nicely:

Says a lot about the cable industry when the CEO of one of the most important players in the business has no idea how Apple’s technology is disruptive to his own.

Being potentially disruptive to the cable industry, one would be certainly entitled to think that the head of Time Warner Cable should have an aide to let him in on AirPlay, no?