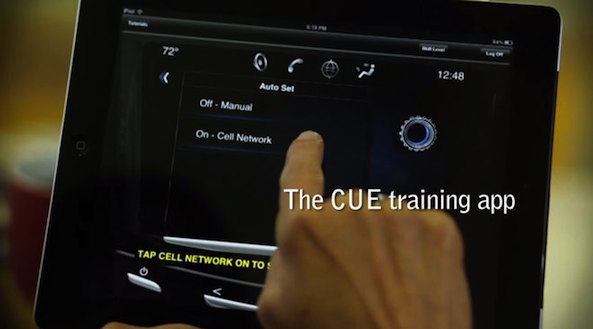 This is kind of cool: Cadillac just announced that all models of its 2013 Cadillac XTS will come standard with a new iPad. The news comes from the car-maker’s head of customer experience Mark Harland, speaking at the CTIA Wireless show.

It appears that Cadillac will be loading up the tablet with all kinds of customized software, including OnStar RemoteLink, MyCadillac, and other vehicle-specific apps…

“The XTS is arguably the most important vehicle launch from Cadillac in the last few years, and to help owners get acclimated to its features — including the all new CUE infotainment system — Caddy is providing owners of the 2013 model with an Apple iPad.

The inclusion of the iPad is part of a larger launch strategy by Cadillac to reassert itself as the world leader in luxury, and part of that is getting owners familiar with the range of new technologies incorporated into its largest sedan.”

This is interesting for a couple of reasons. For one, it means that Apple just added another major client for iPad sales. And two, it implies that we could start seeing auto-makers supplementing iPads and iPad software for paper user manuals soon.

In fact, Cadillac already says we can expect to see a similar move across its entire lineup in the “very near future.” Cool.