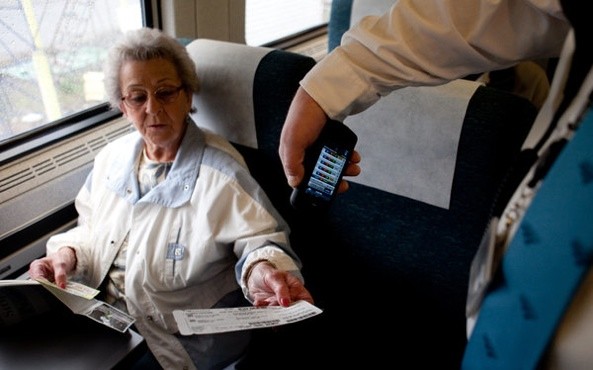 We’ve seen some rather interesting uses of Apple’s iPhone in medicine, armed forces and a bunch of other verticals. Modified iPhones are now also being used as an electronic ticket scanner at Amtrak, a government-owned intercity passenger train service in the United States.

Passengers on a few Amtrak routes can take advantage of a new pilot program to print tickets or show a special bar code, included with a paper or digital ticket, for conductors to scan. And because it all goes through a custom app, train conductors are able to keep track of passengers on board…

With the new iPhone-powered system, conductors can monitor passenger check-ins in real time. That will help them manage seating: if there are passengers who don’t show up, for example, it will be easier to fill empty seats with other passengers.

Each conductor’s iPhone is equipped with a case containing an extra battery and a bar-code scanner, and has a special app to scan tickets but also to do much more.

Amtrak coughed up a cool $7.5 million to run the project, with $2 million worth of iPhones and related hardware and the remaining $5.5 million funding development of the software components.

The company began training conductors to use the system last November. By late summer, Amtrak hopes to have about 1,700 conductors using iPhones to scan tickets.

There’s no doubt this iPhone-based ticket scanning is going to improve Amtrak’s customer service. It’s a long-overdue technology enhancement for the passenger train service industry at large, in my opinion.

My hope is that the industry will drop the old system and embrace digital realities.

We’re living in the 21st century, who the heck wants a hole punched in their ticket?