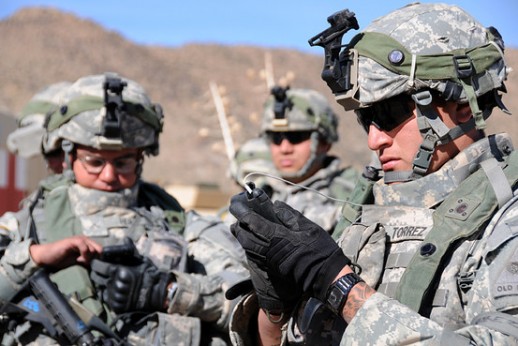 Following in the footsteps of the U.S. Government, the Army is planning to hold desert trials in the U.S. next week to test smartphones and tablets for use during war. Devices include the iPhone and Android-powered handsets, which will be stress-tested with a variety of applications that could see troops using smartphones during battle.

The devices would be used for things lie monitoring surveillance cameras or downloading “up-to-the minute information from a remote database,” according to a Wall Street Journal report…

The tests will take place over 6 weeks at White Sands Missile Range in New Mexico and Fort Bliss in Texas. The Army wants to develop applications to perform tasks like streaming video shot from a drone, which would mean troops could drop their existing equipment for small, lightweight smartphones.

However, if these devices aren’t cut out for Army life, they won’t get in. Michael McCarthy, one of the Army’s project leaders, said:

We want to give people the right phones for the right reasons, not just give them another shiny thing to hang on their equipment carriers.

If they do make it to battle, smartphones – with their GPS functionality and myriad of other useful features – could be a huge advantage to U.S. troops. The Army is currently testing applications that aim to speed up the treatment of soldiers who are wounded in combat by providing the precise location of the injured soldier, in addition to vital information such as their name, health status, and details on their injury.

Another application provides high-tech battlefield navigation with digital maps and augmented reality that allows troops to “scan the horizon” with the device’s camera and receive digital markers on a heads-up display that provides the direction and distance to objects on the battlefield – similar to what you’d see on your screen in a console game.

In total the Army has identified 85 applications for digital testing on a range of devices that include the iPhone, iPad, and those powered by the Android operating system, investing around $4.2 million into the developments of smartphone technology. These applications have been developed and built by both commercial software designers and the soldiers themselves.

One of the biggest pitfalls for these devices is that their batteries need recharging frequently, however, the Army is studying alternative power sources using solar chargers and micro fuel cells that could keep them going on the battlefield.

See – it’s not all about Angry Birds!