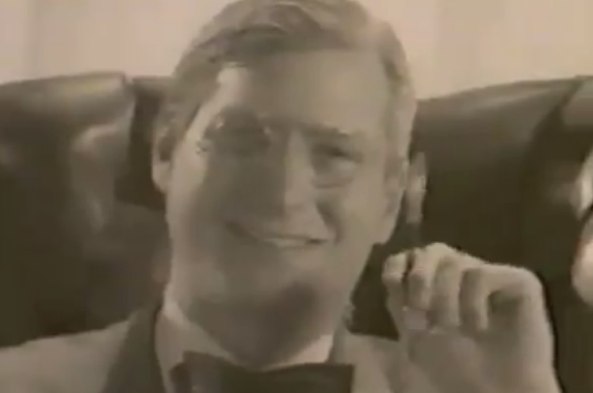 From the depths of the Interwebs comes this little gem with young Steve Jobs playing Franklin Delano Roosevelt. The amusing and charming scene is actually part of a never-before-seen morale-boosting internal film entitled ‘1994’, in a nod at the iconic television commercial that launched the Macintosh craze 28 years ago.

It depicts a World War II tale of good (Apple) vs. evil (IBM) and cost about $50,000 to make which, back in 1994, was a lot of money for a company video. Apple produced this footage to rally up troops at their international sales force meet up in Hawaii…

The film was obtained by Network World blogger Paul McNamara:

A copy of “1944” was provided to me by one-time Apple employee Craig Elliott, now CEO of Pertino Networks, a cloud-computing startup located two blocks from Apple in Cupertino.

You’re gonna have to hit the source link as we couldn’t embed the clip, apparently an exclusive discovery by Network World:

Elliott, who worked at Apple from 1985 to 1996, says he has “never seen (the film) anywhere else” and that there has been “no additional circulation” as far as he knows. I couldn’t find it online, either – the year 1984 was pre-World Wide Web, of course — which doesn’t mean it isn’t out there.

The author notes that two snippets from “1944” do appear in a photo-montage tribute by Apple employees to mark his 30th birthday.

This one’s worth your time so I urge you to watch the clip over at Network World and come back here to share your thoughts down in the comments.