With just one device family, Apple’s iPhone has managed to outgrow Google’s Android platform in Japan over the past three months, gaining market share, a survey note out today from research firm comScore indicated. While we’ve known for awhile that Japan’s iOS-Android duopoly is a sign of things to come, the numbers are nonetheless eyebrow-raising.

Together, the two platforms accounted for a staggering 95.6 percent of all smartphones sold in Japan, where still just one in five own a smartphone.

Looking at the 19.3 million smartphones that shipped in Japan during the three months ending in February, Android marginally increased its share to 61.4 percent while Apple ranked second with a 34.2 percent share.

Both Google and Apple have grown their respective shares, but Apple has notably managed to outgrow its rival by climbing 1.3 percentage points versus November 2011 while Google increased its share of the market by 0.3 percentage points.

Apple ranked eighth in this broad market segment with 6.5 percent share of all mobile phones – again, gaining the most of all device manufacturers by increasing 1.6 percentage points since November 2011. 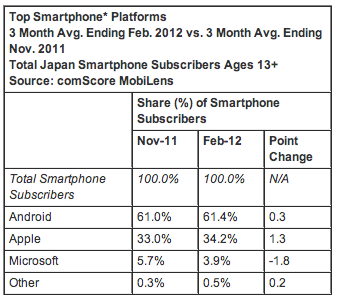 Should Microsoft fear that the iOS-Android duopoly will create an impenetrable barrier to entry or does the Redmond giant has a long-term vision and marketing dollars to force Windows Phone upon consumers and carriers as a viable third platform?