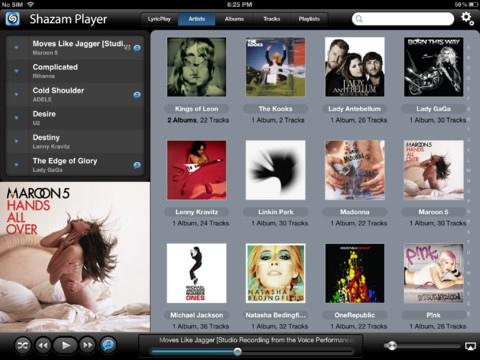 Shazam Player, a cool music player software that landed on the iPhone and iPod touch last month, has been updated today with new features and native support for the iPad.

The program now takes advantage of the iPad’s 9.7-inch canvas so the user interface feels less cluttered and it supports the new iPad’s Retina display.

The biggest addition that’ll do wonders for your home karaoke sessions is support for AirPlay via the Apple TV, allowing you to beam those lyrics to your big screen telly…

• Now optimized for iPad!
• View LyricPlay on your TV with AirPlay and Apple TV
• Enhanced Retina support for the new iPad
• Fun visualization for non-LyricPlay tracks

I like Shazam Player a lot and have been using it quite often as a decent replacement for the non-intuitive and boring stock iOS Music app from Apple.

If you’re not familiar with it, Shazam Player (not to be confused with the Shazam music recognition app) packs in a number of features you’d expect from a decent music player. 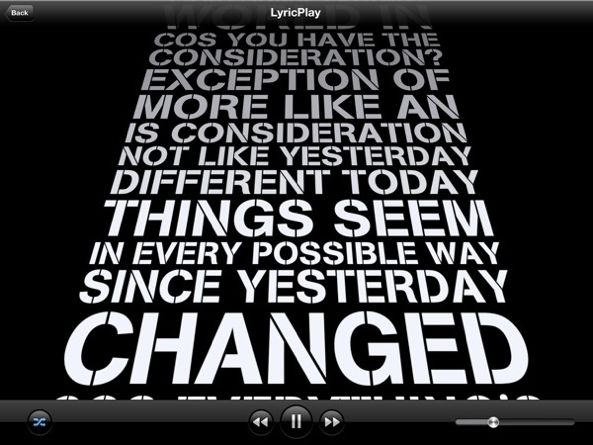 Lyrics on your telly, Star Wars style. Image via MacStories

It also throws in that Shazam magic and social aspects for good measure. The app scans your music library and marks tracks with LyricPlay support accordingly. You can also create your own playlists, share tracks and the associated music videos across social media and more.

And with support for the new iPad, enjoying lyrics just got a whole new meaning on the tablet’s Retina display.

The biggest selling point – if there’s such thing in a free app – has to be AirPlay support.

I AirPlay a lot on my second-generation Apple TV so the ability to render lyrics on my 50-inch Panasonic Viera plasma TV via AirPlay is certainly a welcome addition, especially when a bunch of friends come over for a karaoke session or to just sing along to a song.

Have you discovered the benefits of Shazam Player already?

If not, I suggest you give it a try.

It costs absolutely nothing so you can’t go wrong.