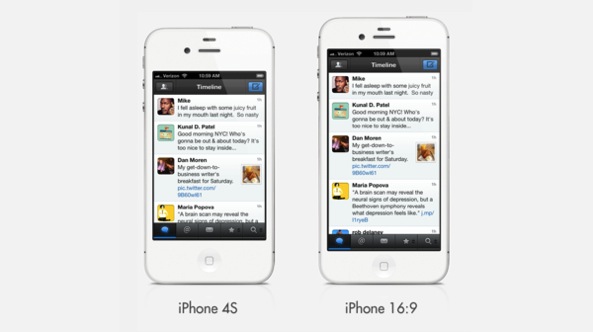 There’s no shortage of iPhone mockups these days, a tell-tale indication of the launch date drawing near (we’re looking towards a Fall launch). We already told you about one possible iPhone mockup and shared an interesting theory regarding the argument for a four-inch iPhone.

The problem is, the vast majority of artists’ renditions depict an iPhone with a blown up display that, however, features the same 3:2 aspect ratio as all iPhone and iPod touch models back to 2007.

So, how about a four-incher with a 16:9 aspect ratio display?

The above mockup, credited to Dan Provost (via MacStories), depicts a 16:9 iPhone with a four-inch display.

The image above shows the current iPhone, a mockup of the alleged 16:9 phone, and a mockup with a bigger 3:2 screen at 300dpi, which measures 3.84” diagonally. I estimated that the physical size of the phone would need to increase slightly, getting taller in the 16:9 version and wider in the 3:2 version. I don’t think either of these size increases are deal breakers. The 3:2 version is actually still narrower than the iPhone 3GS.

The big issue with changing the aspect ratio: apps.

Because Apple definitely would not reduce the iPhone 4/4S’s 326 pixel-per-inch count on a larger canvas, elongating the 3:2 inch to a 16:9 aspect ratio would increase the number of pixels, meaning all existing apps would not scale up properly to fill up the entire screen.

The easiest and the least user-friendly solution would entail letterboxing the app’s user interface.

Provost has an interesting take on the dilemma:

I think Apple should keep the 3:2 aspect ratio and increase the physical size until it reaches the 300dpi retina boiling point, maintaining the 960×640 pixel count.

Doing this would let Apple brand a four-inch iPhone with a 16:9 display under the Retina moniker whilst keeping the existing 960-by-640 pixel resolution for app compatibility.

Bumping up the screen to a 16:9 aspect ratio and retaining a 326 pixels-per-inch density would increase total number of pixels available. Apple could use those extra pixels for additional user interface elements.

Think widgets, a souped up multitasking bar, bigger Dock icons and even – why not – touch controls like the navigation buttons found on the Samsung Galaxy Nexus.

Those are all valid points and if Apple chooses to take the 16:9 route, they’re definitely not going to make everyone’s life harder by requiring that developers update their apps just to cater for an extra few hundred pixels.

Apple is all about simplicity. I’m convinced they’d rather keep apps running at the 960-by-640 pixel resolution and use the extra pixels to tweak the iPhone’s user interface and provide some unique software features not found on 3:2 iPhones – just like Siri has remained an iPhone 4S exclusive, even though it’s just software that we know runs well on non-A5 devices.

There seems to be a consensus out there that Apple should increase the screen size of a next-generation iPhone to a four-inch(ish) canvas.

I’m not a proponent of blowing up the iPhone’s display just because the Android camp has been doing it in the absence of any meaningful and major differentiator.

But I sure would prefer my iPhone with a 16:9 aspect ratio display.