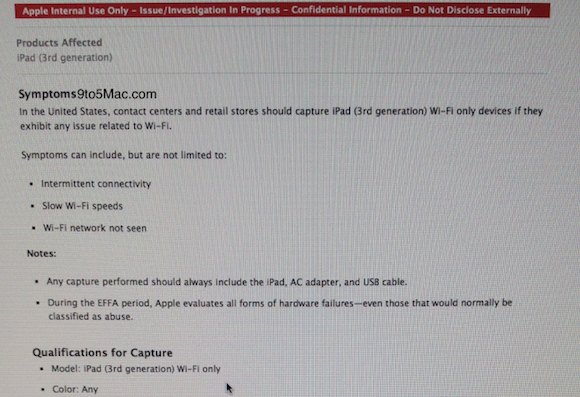 Experiencing Wi-Fi problems with your new iPad? Apparently you’re not alone. According to a recent report from 9to5Mac, hundreds of new iPad owners have taken to Apple’s online support forums complaining of the issue.

In fact, the site has gotten its hands on an internal Apple memo (above) that instructs retail employees to “capture” affected devices — meaning send them in to Apple for inspection — and replace them under warranty…

The issue seems to only be affecting third-generation Wi-Fi iPads, and includes intermittent connectivity, slow data speeds, and inability to see Wi-Fi networks.

Here’s one user’s explanation of the bug:

“I am in a hotel with my laptop and new iPad 3. The laptop Wi-Fi reception is as strong as it gets, but the iPad only registers a weak signal. Anyone else having similar problems? Any suggestions?”

If you’re experiencing Wi-Fi problems with your new iPad, try taking it in to your local Apple Store. If they determine that the issue isn’t software-related, it sounds like they’ll replace it on the spot.

Have you been having problems with your new iPad?