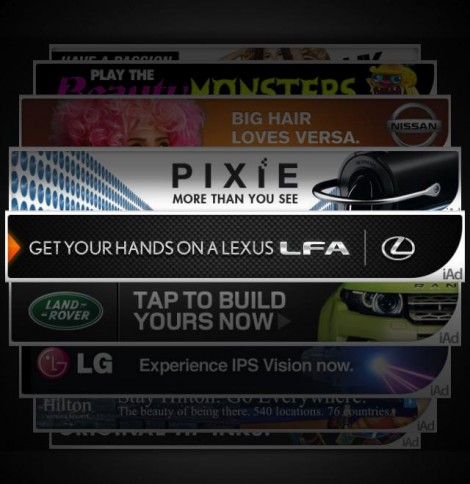 As noted by 9to5Mac, Apple has announced that developers will now start receiving 70% of the revenue generated by iAds in their applications. That’s a 10% increase over the 60% cut they received in the previous arrangement.

The move isn’t surprising considering how much trouble the mobile advertising service has had gaining traction. Apple has even had to adjust the numbers for advertisers, dropping the entry-level price from $1 million to $100,000…

From the updated Developer Agreement:

“(a) Apple Campaigns. Developer should receive seventy percent (70%) of the Net Advertising Revenue derived from the sale of advertising on the Developer’s Mobile Properties (“Developer Revenue Share”) net of any applicable taxes as provided in Section of this Agreement. The Developer Revenue Share percentage may be adjusted from time to time at Apple’s sole discretion. Notice of material changes to the Revenue Share percentage will be posted on the Company Portal. “Net Advertising Revenue” is defined as gross advertising revenue recognized through the delivery of ads by Apple less: a) any allowances actually made or taken for returns, credits, cash discounts and promotional allowances; and, b) Agency and agent fees, discounts, commission and referral fees.”

For those of you who aren’t familiar with iAd, the service integrates full-screen, interactive advertisements into App Store applications. Apple launched the platform on July 1st, 2010, shortly after it acquired Quattro Wireless.