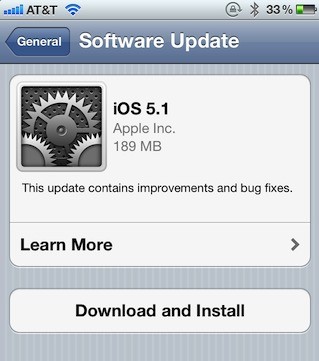 Smith pulled the data from the user base of his popular iOS app, Audiobooks. The app sees about 100 thousand downloads on a weekly basis, so admittedly, its users provide a nice little test market. Now, on to the numbers…

According to Smith’s report, 61% of users are currently running on the latest version of iOS — iOS 5.1. That’s a pretty big number considering the software was released just under three weeks ago at Apple’s iPad event.

Going down the line, the numbers show that 18% of iOS users are running version 5.0.1. This isn’t too surprising given the fact that a) there isn’t an untethered jailbreak available for iOS 5.1 yet, and b) 5.1 is still fairly new.

Last but not least, Smith’s data shows that 1% of users are running iOS 5.0. But perhaps even more interesting is that it also shows that nearly 20% are still using a version of iOS 4.X. What’s the deal with that?

Even though this data obviously doesn’t represent the majority of iOS users, it does provide some nice insight into the world of iOS version adoption. These results bode well for developers, who typically like to see as little fragmentation as possible.

In comparison, less than 2% of Android users are running the latest version of the mobile OS (Ice Cream Sandwich). While this, as Smith points out, likely has more to do with availability than anything else, it still helps explain developers’ frustration with the platform.

What version of iOS are you running?