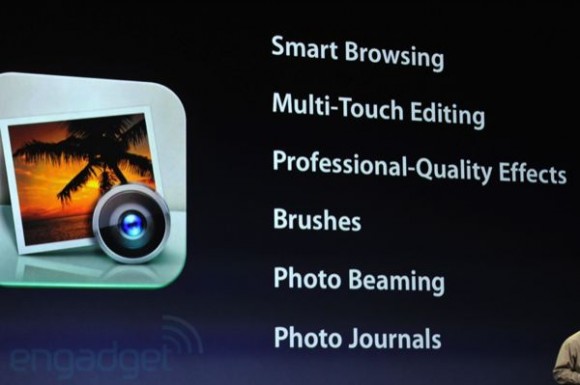 There have been many mixed reviews over Apple’s newest app, iPhoto for iOS. The app allows users to make quick edits to their photos and then share them across social networks. Some say they love it, while others say it’s too clunky to use.

However, that’s not stopping customers from downloading the new app. Apple told The Loop today that the $4.99 app is now being used by 1 million users, since its launch 10 days ago…

As a reminder, iPhoto for iOS features:

Use simple gestures to quickly sort through photos and find your best shots. A powerful set of Multi-Touch tools helps you perfect color and exposure, crop, straighten, and retouch images. Enhance pictures by adding beautiful, Apple-designed effects with just a tap. Or use fingertip brushes to apply adjustments exactly where you want them. In addition to posting photos to Facebook, Flickr, and Twitter, you can beam photos between your iPhone and iPad, stream photos and slideshows to your Apple TV with AirPlay, and use iCloud to publish photo journals to the web to share your stories with friends and family in a whole new way.

Apple introduced iPhoto for iOS at its third-generation iPad event on March 7th. It is currently only available for devices running iOS 5.1, excluding the original iPad. However, it is possible to get the app running on iOS 5.0.1 and the original iPad with some trickery. Apple isn’t counting downloads in today’s numbers, but users that have actually purchased the app.

You can download iPhoto for iOS from the App Store for $4.99.

What do you think of the app?