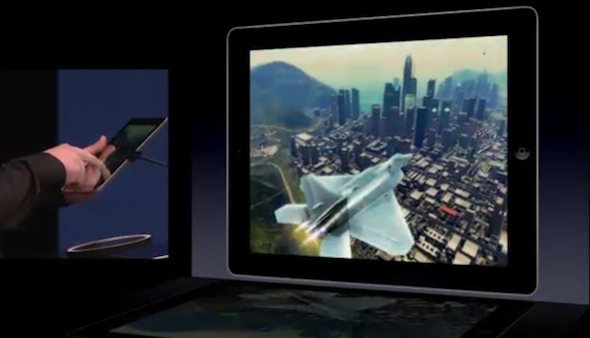 As noted by MacRumors, the simulator known as Sky Gamblers: Air Supremacy has just gone live in the App Store. You might recognize the game from Apple’s iPad event last week, as it was one of the titles demonstrated on stage.

So what’s so special about Sky Gamblers? Well besides being one of the first apps to take advantage of the iPad’s new features, its developers are saying that the game delivers “console quality single and multiplayer experiences.”

See it in action after the break…

And it doesn’t just look pretty either. The Namco title is packed with a host of components, including over 40 jet configurations and more than 40 billion square feet of map to play on. Yeah, billion.

Sky Gamblers is optimized for the iPhone 4S and the new iPad, but it’s compatible with older devices as well.

The game is already receiving glowing reviews in the App Store, so at $4.99 we don’t mind recommending that you pick it up today. Especially if you plan on getting your hands on a new iPad soon.

What do you think of Sky Gamblers?