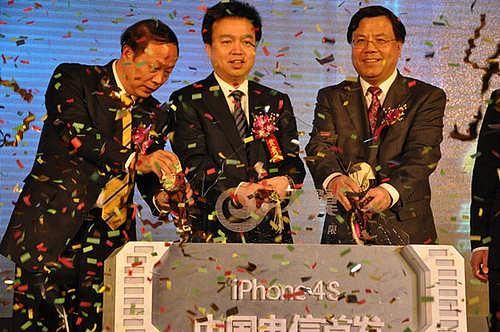 Apple’s iPhone is now available on the second and third largest carriers in China, China Unicom and China Telecom. Both carriers combined give Apple access to 34% of China’s whopping 988 million mobile users. However, like in any market, Apple is competing for those sales.

According to a new report from Bloomberg, quoting Gartner, Apple’s iPhone is having trouble gaining marketshare in China, while Samsung’s lead has tripled…

“I don’t expect Apple to replace Samsung any time soon,” Gartner analyst Sandy Shen said in an interview. “China Telecom is the nation’s smallest carrier, so the extent to which they can help Apple is quite limited.”

Apple began selling the iPhone on China Telecom last week. The Cupertino-based company currently sits at 7.5% marketshare, while Samsung sites at 24.3% marketshare. So why is Apple so behind as the fifth carrier in China?

Apple, unlike Samsung, isn’t selling its iPhone on the nation’s largest carrier, China Mobile. China Mobile currently has an astounding 655 million subscribers, that if Apple partnered with, would give them a huge boost.

The next iPhone has been rumored to be compatible with China Mobile, due to a new Qualcomm chip that has launched. The new chip may give Apple the ability to put the phone on all three China carriers.

China has proven to be a huge emerging market. Apple’s CEO Tim Cook made it a point on the company’s latest earnings call that it was aggressively attacking China.

Samsung’s lead in China isn’t inductive of sales in other parts of the world. Apple is studied to be the top smartphone manufacturer worldwide, selling 37 million iPhones last quarter. That’s not to mention the 15 million iPads it also sold.

Perhaps Apple can make some gains on Samsung later this year, but for now, Samsung continues to hold a steady lead in China.