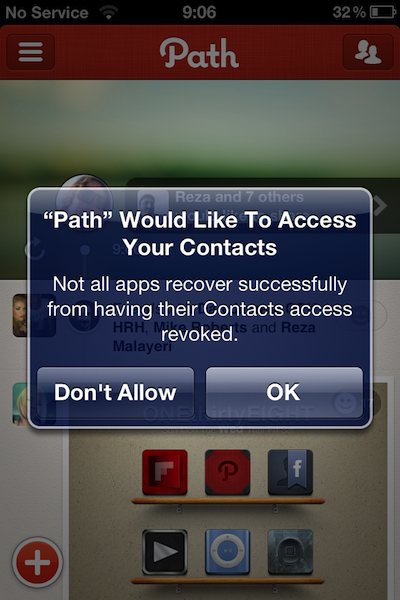 Apple has recently come under heavy fire over its privacy policies. Earlier this year it was discovered that third-party iOS apps could access a user’s address book without their consent. And recent reports that photo albums are subject to similar unauthorized access have added fuel to the flames.

Now it looks likes folks are so worried about the problem, that they’ve asked the Federal Trade Commission to get involved. ArsTechnica is reporting that New York Senator Charles Schumer is urging the FTC to look into Apple’s widely-documented user privacy concerns…

Here’s an excerpt from Schumer’s letter:

“These uses go well beyond what a reasonable user understands himself to be consenting to when he allows an app to access data on the phone for purposes of the app’s functionality. Smartphone makers should be required to put in place safety measures to ensure third party applications are not able to violate a user’s personal privacy by stealing photographs or data that the user did not consciously decide to make public.”

A few weeks ago, Apple gave an official statement regarding the user privacy, saying that it was working on a software update that will require explicit user approval for apps to access information. It’s assumed that the fix will be included in the iOS 5.1 update, which we expect to see within the next week or so.

Schumer also implicates Google in his letter, stating that Android is just as guilty of failing to protect user privacy as Apple. Google, however, is maintaining its stance on allowing access to information stored on Android devices, but says that it’s considering adding a requirement for user approval in the future.

What this seems to boil down to, is what folks should have been assuming all along: the more you use your device for information sharing and social networking, the less private your life becomes. And we’re not sure the FTC needs to get involved to figure that out.

What do you think? Are you concerned about your privacy?