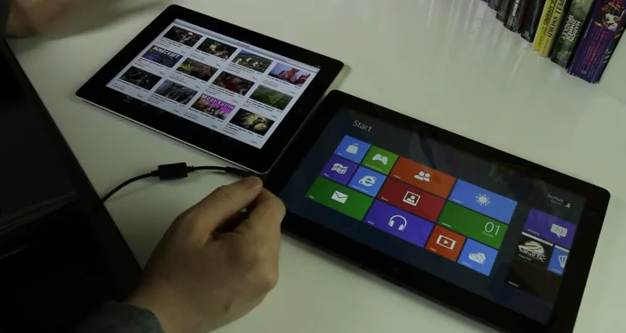 We know you’re a devoted iOS user, but isn’t it always interesting to know what goes on up in Redmond? Microsoft just released its consumer preview of Windows 8, which is designed around tablets. The lingering question of course is how it compares to the iPad. Microsoft’s tablets haven’t really succeeded in the past, so it will be interesting to see if Microsoft got it this time.

The Verge is ready to answer the question on our mind and has compared the iPad 2 to a Windows 8 tablet on video. The new Metro UI actually doesn’t look too shabby…

In the video you can see Windows 8 consumer preview against the most popular tablet, the iPad 2. The Verge goes through basic gestures on the iPad’s home screen, like the basic 4 finger pinch, while showing Windows 8 is a little more gesture focused.

Perhaps having a leg up on the iPad 2, Windows 8 features a new type of multitasking with side-by-side apps. While the gesture to get multitasking working looks a little confusing at first, once you get the hang of it, it looks pretty cool.

Going for uniformity, Windows 8 follows Windows Phone’s UI, having ‘live tiles’ on the home screen. The ’tiles’ let you launch apps that are pre-loaded with the device and downloaded from the Windows Marketplace. In the video below, you’ll notice things seem to be pretty smooth. The browser for instance seemed quick to load, but had a few missing items — like the ability to save images.

While it most likely won’t pass Apple’s iPad in marketshare anytime soon, what Microsoft has so far looks pretty nice. Microsoft seems to understand the importance of UI and the effect it has on users. And it’s worth noting that this is the consumer preview and more updates are likely to come.

What do you think of Microsoft’s new tablet operating system?