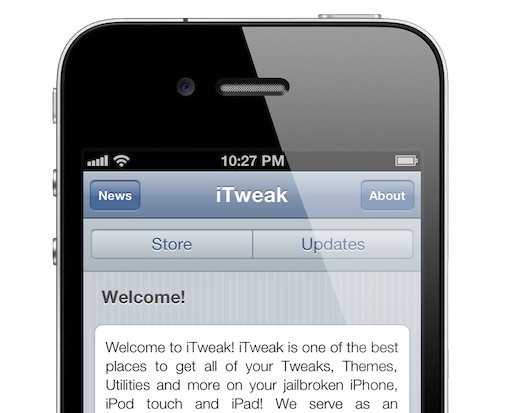 Your one and only option for installing jailbreak applications on your iDevice these days is Cydia. It has been the undisputed installer of choice for several years now, and even if a few others – Rock, Icy – tried to make a name for themselves, Cydia has always prevailed.

We’re so accustomed to Cydia that every time we hear about a potential new alternative, we get defensive very quickly. Change and competition are great, but the comfort of a househould name like Cydia is hard to break. But that’s exactly what the iTweak Store aims to do.

Surfaced a couple days ago, the iTweak Store presents itself as a web based alternative to Cydia. We sat down with Kyle Pierre, one of the developers behind iTweak, to learn more about what their project is all about and why we should be on the look out for them…

iTweak is a cool new Cydia alternative, which runs off in the Safari browser. It’s fast, sleek, and still as powerful as Cydia.

Can you tell us more about your team? Who they are, where they live, what they do, etc…

Our team consists of multiple people in multiple place with different hobbies that they practice in their spare time.

@mtamermahoney, or Max, who lives in Boston is my co-admin. He’s been doing all these epic things in his spare time, starting with HTML, then JS, CSS then PHP, then started doing programming. He does Minecraft and loves messing with servers.

Next, our lead Mac app developer, Rocco (@Frostbitee08), lives in Washington D.C., and like Max, does epic coding and messing with iOS devices.

Two other members of the team, Alex (@applecpugeek), and Thomas (@Wtoppenheim) help with our marketing, and also love messing with iOS devices, and messing with servers.

Eric, (@KerzX) is one of my personal friends, who is my personal harasser, and loves iDevices and making cool new web-based things every day.

Casey (@CaseyTal) is an awesome skilled coder, who maintains Siri servers and plays around with iOS a lot. He’s a great member of the team. Faiyaz (@SteelFlexInc) is one of our original members, and helps with marketing like Thomas and Alex. He loves disassembling iPhones and theming/modding his multiple iDevices.

Why did you develop the iTweak Store?

Many reasons. I had the vision of a browser-based around August of 2011, and started the framework of the store as a small idea I thought would never come to light. After seeing my final product, how good it looked, and what potential it had, I thought it would be an awesome idea to deliver to Jailbreakers worldwide. I believed that Cydia was watered down by many things, and that it needed some powerful new competition to pursue the both of us to deliver better products to the end user.

Do you have something to show or is it still a work in progress?

Right now, we’re rebuilding the main parts of iTweak. When users hear about something that’s installed through the browser (even though we use a light plugin), issues of malware and security are some of the first things that pop into their minds. To be safe, we’re rebuilding both the plugin, and the major parts of the main site. There is some things to show, but the main goodies are having a facelift at the moment.

A lot of people are skeptical about the iTweak Store, what do you have to say to these people?

Well, it exists, and it’s being worked on very hard by everyone in the team. It’s going to be very awesome, and the people who are skeptical should give it a try once we release it, it’d be a nice change from Cydia.

Why will users choose iTweak over Cydia? What sets it apart?

In the jailbreak scene, Cydia’s reign has been dominant for a couple of years. Competitors have come, and gone, and all have failed because they’ve kept their ideas inside the typical box. Users would shift to iTweak after seeing the speed, stability, and friendly environment. Cydia can be very confusing and frustrating for the typical jailbreak user who doesn’t know everything about iOS, but JB’s for a cool theme or tweak their friend shows them. iTweak is introduced as a friendlier way to tweak, and this, and all the goodies (our PC/Mac clients, developer portal, etc), plus it being web-based, sets it apart from all the rest.

What’s different about your Cydia alternative and the others we’ve seen in the past (Installer, Icy, etc.)?

Each of these applications have used the same concept ideas as each other. All of them are packages you need to sit through an install process to actually get to use, and when you do get to use them, they’re extra confusing. iTweak was thought of as looking outside of the box.  We thought, if we take a simple UI, put it on a place that’s easily accessible like the internet, and use a powerful system, we could make something magical.

How will you ensure it’s successful?

Will iTweak be compatible with Cydia repos?

This is still something in limbo, but most likely it will.

When can we have a first glimpse at the iTweak Store?

When our little mini-facelift is done, we’re providing blogs like iDownloadBlog with the beta plugin and full access to our beta system.

What about the Windows and Mac clients?

They’re going very well, and making a lot of progress every day. Rocco has been making amazing progress on the Mac app, and @themrzmaster has been doing the same with the Windows’. Currently, the Mac app is in alpha, and the Windows app is in Beta 3. We expect it to have full package management, along with iTweak Store integration, meaning you can download your favorite Tweaks, Themes, Utilities and much more and sync them to your device with the client.

Do you have support or help from any prominent jailbreak dev?

I’ve kept this secret until Sunday, so I’ve never really talked to any prominent Jailbreak dev on it. Right now, we don’t have any, and I haven’t seen any feedback from any, would be nice to get some developer opinions on iTweak.

I’ve heard things questioning the legitimacy of iTweak, or if it’ll ever come to be (looking hard at you, Jeff), some people even asking if it’s just a joke to stir up discussion in the community… I’d like to say, that’s total BS, iTweak will come to see the light of day really soon, it’s definitely not a joke, it’s being developed hard everyday.

Contrary to popular belief, iTweak is not built in iWebKit, it’s written in JQTouch and being re-written soon in JQueryMobile.

We want to thank Kyle for taking the time to tell us more about his project. We sure are very excited about the iTweak Store and we can’t wait to get our hands on a beta. We’ll keep you posted.