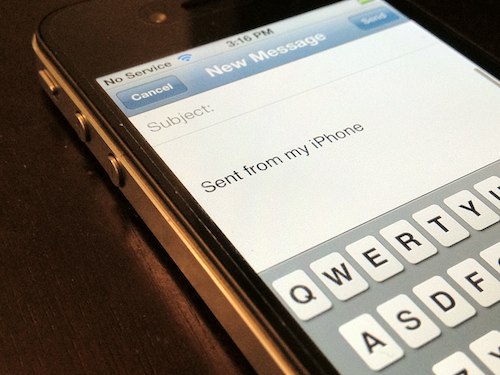 I’ve heard the expression, “fake it ’til you make it” but this is a bit ridiculous. The Financial Times is reporting that a new trend is starting to catch among China’s mobile users — fake iPhone signatures.

I know, an Apple-related knock off in China, big surprise. But this might actually be taking things too far. Apparently users are willing to pay money for services to auto-add ‘sent from my iPhone’ to all of their messages…

As you might have guessed, these users don’t have iPhones. But they sure want other folks to believe they do. So much in fact that they’re willing to pay $1 a month to fund the charade.

Sure, $1 is peanuts compared to the actual cost of an iPhone. But it’s still weird. Here’s an advertisement from one of the vendors: “The iPhone is too expensive. If you don’t want to spend that money, then fake it!”

But weird or not, there’s obviously a market for this kind of service. We’re just not sure why.

What do you think of the fake ‘sent from my iPhone’ service?