This has to be one of the silliest ideas I’ve seen in what, like a day?

Fearing being nabbed by the authorities, cell phone counterfeiters opted to try to get rid of the evidence by tossing 656 fake iPhone 5 boxes out of an 18th story apartment window. Yeah, nobody’s going to see that. 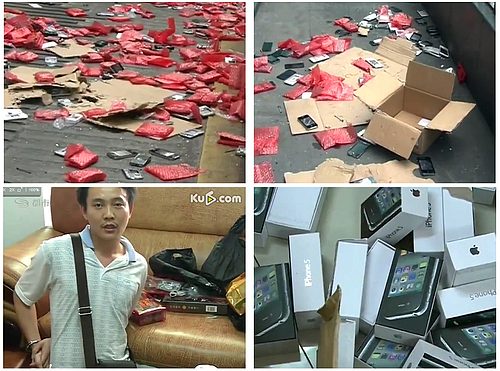 The counterfeiters have an obvious fondness for the iPhone, but they weren’t discriminating. Among the items tossed were 284 Nokia phones, and 60 Sony Ericsson phones as well.

Shanzhai factories, as they are known, refer to operations that produce counterfeit goods that closely imitate the real deal. Unfortunately, it looks like these four dealers didn’t get the message that the iPhone 5 won’t be here until September.

The factories — especially prominent in the gadget crazed Shenzhen — are facing increasing scrutiny from local authorities as they try to clean up the area’s foreign perception.

Thus, it’s getting more difficult for shanzhai operations to go about business the old fashion way, with many opting for more covert means of distribution.

Something tells me that tossing 1,000 cell phone’s, cases and all, out of an 18th floor apartment window, is anything but covert.

The counterfeit goods smashed cars and fences, but thankfully, no one was hurt by the sudden deluge of iPhones.

Oh, and as you may have guessed, the foursome was still apprehended by the po-po.

The good news is that the people standing below the window got their hands on an “iPhone 5”, and it was free no less.

How many of us can say we got an “iPhone 5” for free, and it’s not even summer yet?