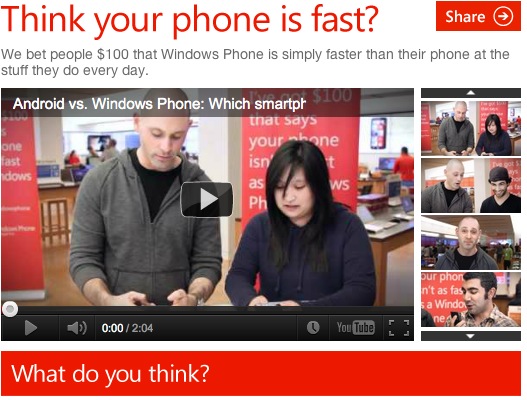 Microsoft is taking a leaf out of Samsung’s playbook by going on the offensive in the battle for smartphone supremacy. With Windows Phone 7 not quite setting the world on fire with huge sales figures and just a 2% market share, Microsoft has apparently decided to go after the competition with a new ad campaign.

Posted to the Windows Phone Facebook page, the new push pits Windows Phone 7 against various other smartphones, including the iPhone, across a range of uses and applications. The premise is that Microsoft’s WP7 evangelist Ben Rudolph is offering $100 to anyone who can perform tasks faster on their own handsets than he can on his Windows Phone.

As is to be expected, he’s not handed over any money yet…

The video we’ve embedded shows a swathe of unsuspecting people attempting to take a photo and upload it to Facebook quicker than Rudolph can with his WP7 device. He wins, obviously, though having users who can’t find the Facebook app on their iPhone perhaps helps fudge the figures somewhat! You’ll need to watch the video to see what we mean.

We’re actually fans of Windows Phone here at iDB – in fact, this particular writer is currently testing out a Nokia Lumia 800 and it is certainly a capable smartphone. That said, it’s not an iPhone. Whether that’s a good or a bad thing is obviously very much a matter of opinion. Remember folks, there’s more to technology than just Apple!

Microsoft will be hoping that this latest publicity push can see its smartphone OS gain in market share, and with pundits almost unanimously in favor of what WP7 can bring to the table, it is perhaps puzzling that the platform is languishing quite as much as it currently is.

Have you given WP7 a try lately?