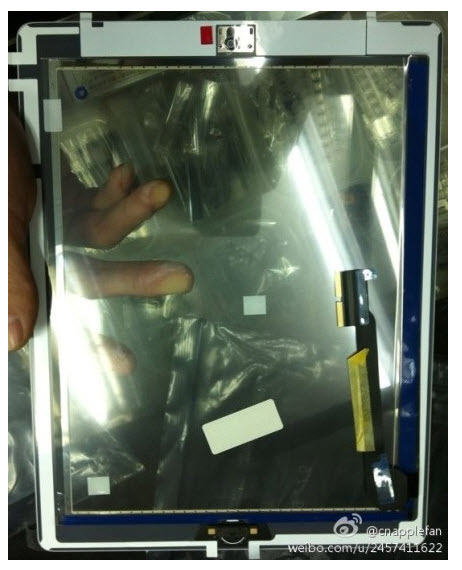 Just yesterday we showed you some rumored images of the purported iPad 3 casing compared to the current iPad 2. Well, another day and we have another supposed leaked part.

This time around it’s the front and glass digitizer assembly which, according to MacRumors, come by way of Sina Weibo, the Chinese micro-blogging site. It appears to show that there are very few noticeable differences from the iPad 2 set-up…

There seem to be no changes where the Home Button, front-facing camera position or ambient light sensor arrangement are concerned, and the only slight difference is the position of the ribbon cable which extends half way up the side of the glass. The cable on the iPad 2 went in the other direction and was a lot shorter.

MacRumors go on to report:

We’ve now seen reports of the rear casing, the rumored ultra high resolution display and the logic board which leaves only a few more internal components including battery and camera modules. I’m pretty sure these will be leaked in the not-too-distant future as is always the case with such high profile releases by Apple.

On that note we’re still hoping for a March 7th release date which is when Apple is expected to hold their highly anticipated media event.