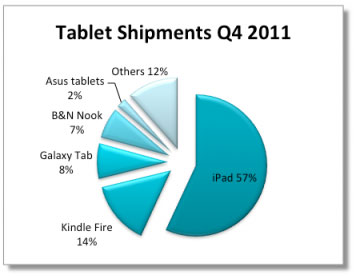 Some interesting news has been released today regarding the recent success of the Kindle Fire, Amazon’s flagship tablet device. According to iSuppli, Amazon managed to grab a 14% share of the tablet market in the last financial quarter, while Apple’s market share dropped from 64% in Q3 to 57% in Q4.

Apple released the iPad 2 nearly a year ago so it makes perfect sense that demand will drop as the year goes on, especially when new products like the Fire get released later in the year. I expect market share to significantly increase further in Apple’s favor when iPad 3 drops…

While the Kindle Fire has been relatively successful shipping 3.9 million units in the last quarter, iSuppli noticed one significant caveat:

The long-term viability of the [Fire] will hinge on the success of Amazon’s business gamble, which depends on tablet sales driving substantial new online merchandise sales at Amazon.com in order to attain profitability.

Sure the Kindle Fire and other value-priced tablets may offer a great alternative to the iPad, especially where price is concerned, however their business model seems to be built on after purchase sales from within the Amazon empire which gives Apple the edge as they make their initial revenue from the device itself, and later on from the sale of content such as apps, books and music.

2011 was a strong year for Apple with a tablet market share of 63% and almost 40.5 million tablets shipped. One thing is for sure, this current competition will no doubt make for an interesting 2012.

Do you feel Apple still have the lead where tablet technology is concerned?