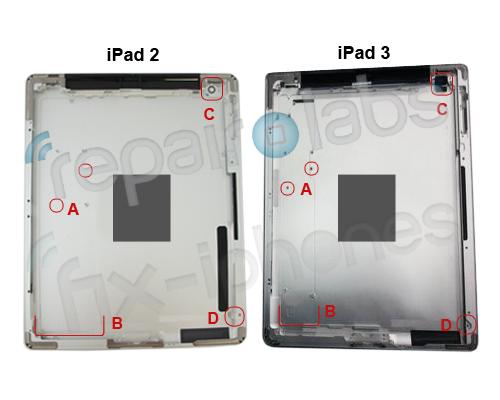 The iPad 3 has been rumored to launch sometime this Spring, but there haven’t been many other rumors besides that. In a new report from Fix iPhones, they show us the supposed backing of the iPad 3 compared to the iPad 2, demonstrating that the new tablet will apparently only have a few subtle changes.

2. More battery. The width of where the logic board sits on the iPad 2 appears much larger than that of the iPad 3. We have long heard that the iPad 3 was going to provide longer battery life, and this back housing seems to support that.

3. The camera is different. It is hard to make a judgment just by looking at the casing, but what we can expect is a different camera on the iPad 3 than what we had on the 2.

4. LCD will be different than what we have had before. Whether or not it will be the super screen we have seen reported will have to wait. But the different mounting does mean that the LCD has been redesigned at the very least.

Due to the change in where the logic board sits on the iPad 3, it will allow for a larger battery that will give more battery life, the report mentions. In typical fashion, Apple has usually increased the battery life across their new devices, so this certainly makes sense.

Lastly, the report touches on the possibility of the new LCD that has been rumored to be included with the iPad 3. They don’t go as far as saying it will be retina quality, but that the iPad 3’s backing definitely has different mounting that indicates a redesigned screen.

What do you think about this latest rumor?