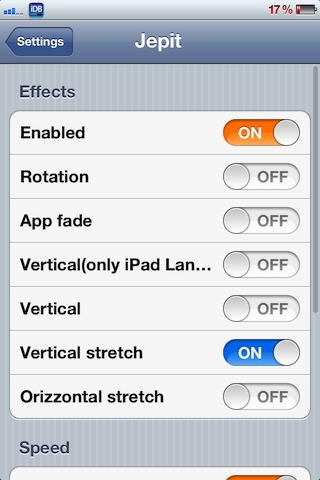 Jepit is a jailbreak tweak that attempts to add new app switching animations to your iDevice.

Along with animations, Jepit also includes the ability to change the speed of said animations.

Sadly, its lack of polish hinders what could otherwise be an eye catching tweak. Take a look as we go one-on-one with Jepit inside…[tube]http://www.youtube.com/watch?v=ux6A5S2zWUM[/tube]

The stock iOS app switching animation features a horizontal wrap-around motion that hides the previous app behind the newly selected app. Jepit adds onto this stock animation and allows you to add additional effects — app fade, vertical, vertical stretch, and horizontal stretch being among them.

Sadly, not all of the animations work, and some of the ones that do are mislabeled, misspelled, or a combination of the two.

In addition to animations, Jepit allows you to adjust the speed of an animation. Again, I had some very mixed results with this; some worked well, while others didn’t work at all.

The bottom line is that Jepit is a tweak that needed a few additional coats of polish before it was released. It’s hard to recommend using it for free, let alone paying the $1.59 asking price.