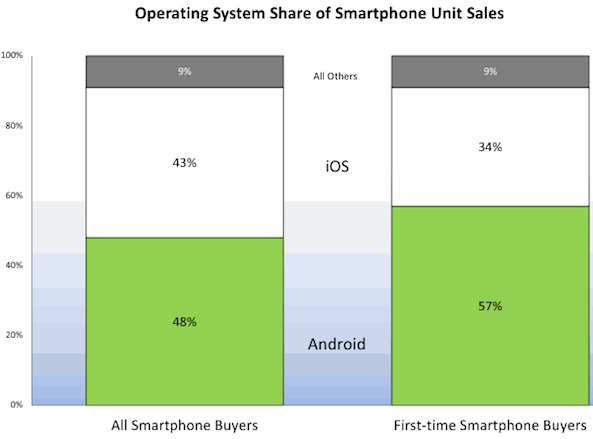 According to research firm NPD Group, Apple has passed up Samsung and LG to become the #1 selling US handset brand in the fourth quarter of 2011. Between the iPhone 3GS, iPhone 4 and iPhone 4S, the iPhone accounted for 43% of the US smartphone market, even though Android’s market share increased to 48%.

Combined, iOS and Android devices accounted for over 90% of US sales, leaving Blackberry, Windows Phone and other mobile OSs under 10%.

That number is due most likely to Android having at least one handset on most major U.S Carriers, not to mention the sheer number of Android devices available.

Out of the three iPhone models available, the iPhone 4S easily took the top spot as it was favored 5 to 1 despite the iPhone 4 cheaper price tag. Executive director of Connected Intelligence for The NPD Group, Ross Rubin said it was due to the newest iPhone’s “faster processor, improved camera and the Siri speech-driven agent.”

What do you think of the iPhone’s jump? Are you shocked that price didn’t play a bigger part in choosing which iPhone to go with?