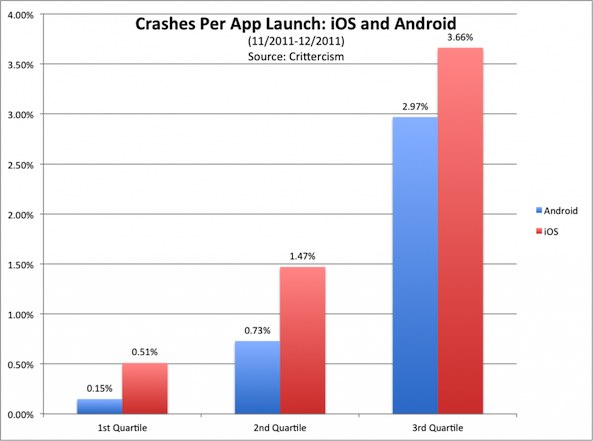 iPhone and iPad apps have always been considered to be much more polished than Android apps by most users. Apple’s strict style guide and closed App Store create a similar feel among apps, while Google’s Android Market is open for all.

Crittercism studied a total of 214 million different app launches between the months of November and December.  A total of 162 million iOS apps crashed, while 52 million Android apps crashed.

Interestingly, doing their research a month after the iOS 5 launch might have not been as inductive of real results. Typically with new OS launches, it takes a while for developers to get their apps to the point where they are more stable. iOS 5 and 5.0.1 made up for 33% of crashed apps on the iOS platform.

The newest iOS could have contributed to the large amount of crashes, and it would certainly be interesting to see how many crashes there are after a few months of iOS 5 on the market.

How is your overall experience been with apps after upgrading to iOS? Are you still seeing an abundance of crashes?