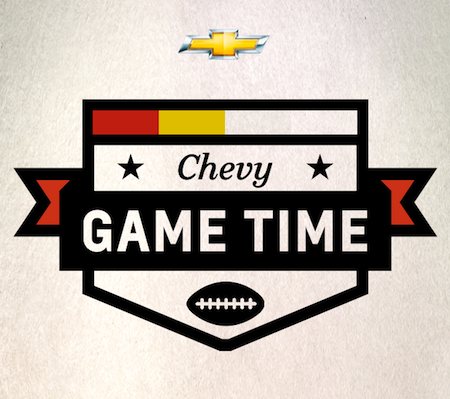 Nearly 170 million viewers tuned in to watch the Super Bowl last year, meaning over half of America’s 308 million residents caught at least part of the the big game.

If you plan on being a part of that statistic today, you’re definitely going to want to download the new Chevy Game Time application for iOS. GM will be using the app to give away thousands of prizes, including several new vehicles…

“Experience the Super Bowl in a whole new way and a play along with the game — commercials and all — as we give away 20 Chevys and thousands of other prizes from our partners. Download and be entered to win a Chevy Camaro just for registering.

Answer live trivia about the game, commercials and more for a chance to win Chevys and thousands of other prizes.

Four chances to win Chevys in our Super Bowl ads during the game and after. Get a unique custom plate ID and watch Chevy commercials closely — if your plate appears in any Chevy Super Bowl spot, you win the car it’s on.”

Win prizes just for watching the Super Bowl and playing on our iPhones? Sounds good to us. If you’re interested, you can download Chevy Game Time from the App Store, for free.

Will you be using the Chevy Game Time app today?