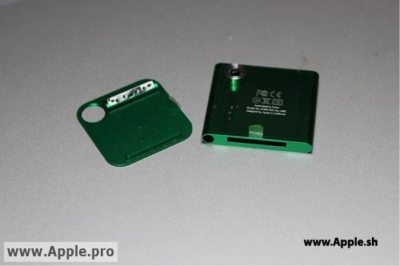 It seems like it’s raining spy shots today. Hot on the heels of the purported iPad 3 photo BGR leaked this morning comes an image of, what several folks are calling, the next iPod nano.

Leading up to Apple’s Fall iPhone/iPod event last year, we heard a number of rumors that the next iPod nano would feature a camera. And although the refreshed device never surfaced, it appears that the product still very much exists…

The image was published earlier today by Apple.pro, a Japanese blog with a fairly solid history of leaking Apple information. The site believes that the hole in the nano’s clip is for the lens of a 1.3 MP camera.

While we obviously have no way of validating the image, M.I.C gadget believes that it’s 100% legit:

“It’s real, and it’s a two-month-old prototype that has big problems. It comes with an auto iris lens that can be affected by diffraction and blurring when the iris opening becomes too small in bright conditions. Ok, I gotta say it simply, it takes overexposed photos. According to our factory sources, Apple have problems with the lens aperture for the next-gen iPod nano, the iris is not functioning correctly to allow the advantages of the low aperture to be utilized.”

Furthermore, M.I.C. gadget believes that Apple is nearing completion of the product and plans to launch the device in the next few months. That seems pretty far-fetched considering that Apple typically refreshes its iPod line in the Fall, (and has done so for the past decade) but it’s possible.

While we’re not sure the tiny mp3 player needs a camera, we are anxious to see the nano get a makeover. Other new features rumored to turn up in the next-gen device are a tiny piezoelectric speaker and support for low-energy bluetooth 4.0.

Would you buy a refreshed iPod nano this year?