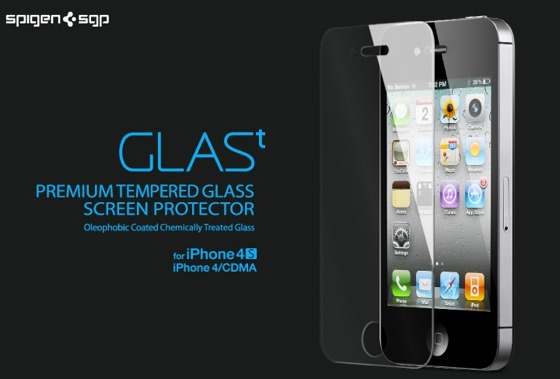 Nobody without a medical condition can seriously claim the iPhone’s all-glass construction was a particularly good idea. While many of us have iPhones that have survived some considerable hammering, plenty have reported of cracks and scratches from the most inconspicuous of goings on.

There are already plenty of screen protectors out there that claim to keep your iPhone’s glass face in pristine condition, but none have grabbed our attention quite like the Spigen GLAS.t has.

For starters, the cover itself is made of, wait for it, glass! Yup, you read that right. Not just any glass though, this thing’s made of tempered glass which is just, well, better…

In an attempt to show just how awesome the GLAS.t really is, Spigen has put together a short video in which an iPhone is subjected to all kinds of nastiness, ranging from a pair of scissors to an electric drill. Unsurprisingly the iPhone and its new protective glass film survice intact.

At just 0.4mm thin, the glass sheet does not affect the iPhone’s touch response, and it’s more oleo-phobic than the iPhone’s screen, meaning grease and grime shouldn’t build up so easily.

We’re going to try and get one of these to test out ourselves, and rest assured we’ll be sharing our results once we have some to share.

Who’d have thought that protecting glass with more glass would be such a good idea?

Buy a Spigen glass screen protector on Amazon, starting at $7.99