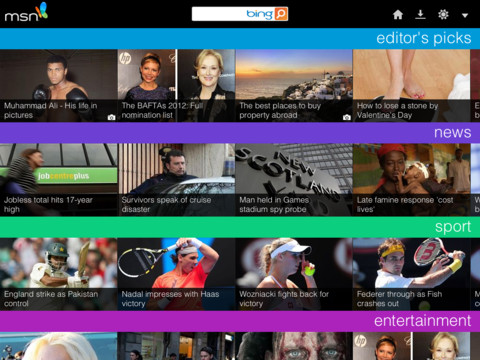 Microsoft’s latest iPad app comes in the form of the new MSN UK app, which was made available today.

The app allows UK users to keep up to date on MSN UK news articles, as well as watch video and even stream them to an AirPlay-enabled device such as an Apple TV.

By using the same horizontal tile interface as Pulse, Microsoft has potentially left itself open to cries of foul play, but the question should perhaps be whether there really are that many different ways to present news items on a tablet device. Will all news apps look similar just because their layout happens to be the most intuitive?

“The MSN experience is now enhanced on iPad – easily swipe to find your favourite news, sport and entertainment articles and videos. Excited about something you read on MSN for iPad? Just tap and share with your friends on Facebook and Twitter (or e-mail a link to the article).”

Microsoft says it does not yet have any announcement to make about bringing the MSN app to other territories, with the UK version currently the only one available for download. We can’t see any real reason why the app wouldn’t eventually make an appearance internationally, though.

The app is free and can be downloaded now from the UK App Store.